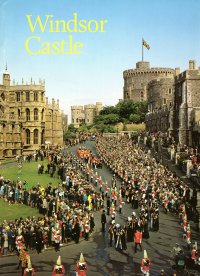 I bought this book in June. I don’t know if I will be watching a lot of football this year, so I’ve started flipping through the travel books and artistic monographs I’ve bought this year instead during the evenings when I don’t want to read another chapter before bed.

This book, as the title indicates, is a pictorial take-away probably sold at the gift shop at Windsor Castle. Appropriate for its time, it has a couple of pictures of Queen Elizabeth II and the Reagans in it. I saw them and thought that she looked relatively young, but of course she did: It was almost forty years ago, and more than half of her reign has since passed.

I was quite wowwed with the castle. Not only are the rooms depicted huge and castley, but the text delves into the history of the castle which was originally a fortification for William the Conqueror. When I look at American history books, particularly the local ones I tend to favor, I read about some town that goes back a hundred years (or two, I guess, since we’re in the 21st century now). But when your building (well, compound, but that’s a word applied to American outposts smart people don’t like) dates back 1000 years, you can describe how King John laid seige to it or that George III redid these buildings.

Fascinating stuff, and it almost makes me want to go to England to see it. My beautiful wife has been to London and likes it–we’re not the sort that travel internationally easily (although in the past we have jetted off to the coasts of our country), and she would like to go there with me someday. Books like this make me want to go. The madness that is the world makes me really not. Time will tell which wins out. Until then, I have a stack of such books that I bought inexpensively at Calvin’s Books on one of our short, driving vacations this year.