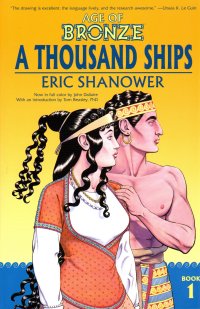 I got this book at LibraryCon in 2019. It’s the first of a series of graphic novels retelling the story of the Trojan War. It takes 200 pages to get to the launching of the 1000 ships–almost; we have not gotten to Iphegenia yet.

The 200 pages tell about the run-up. We get the story of the young Paris, raised as a cowherd away from the palace because of the prophesy that he would bring doom to Troy. We get the story of Odysseus feigning madness because of the prophect that he will wander for twenty years after the war ends. We get Achilles hidden amongst an obscure king’s daughters until Odysseus tricks him into revealing himself as a boy. We get machinations on both side and a pretty good fleshing out of the characters.

The book takes a human-centric approach, consciously as the afterword says, because the author wanted to make it more realistic. The afterword also goes into detail about the sources the author/artist drew upon (buh-DUM-sh) for both the story and the drawings of the period, including the clothing, weapons, palaces, galleys, and so on.

The books is well-illustrated, but not with a look-at-the-comic-art way you get in a lot of comics and graphic novels these days (like this). It tells the stories, not just shows you widely disparate images from the story.

So I will look for the others in the series should we ever have a thing like a con again.