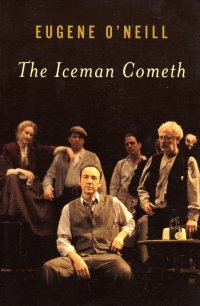 I got this book from ABC Books last week, so at a lull in the Agatha Christie omnibus, I picked it up because I thought a play would be a quick read before I returned to Miss Marple.

It turns out that this is an extra full evening play. It runs 196 pages of dense dialog. It’s not the centered character name with snappy dialog that you get in something like, say, The Courtship of Barbara Holt; it’s more like the character name at the upper left and a dense speech that you get out of a thick collection of Shakespeare (the likes of which I should probably pick up again two (!) years later).

It’s of the subgenre, which is apparently a subgenre given the propensity of plays with similar setting and characters, of “grifters and losers in a bar” type (see also The Time Of Your Life by William Saroyan) which differs from another subgenre of the “grifters and losers in their home” type (such as The Homecoming by Harold Pinter and another play I saw staged at St. Louis Community College-Meramac twenty-some years ago). Given that these were Big Plays that appeared on Broadway or in London, I have to wonder about the class implications of the hoity-toity people getting together to watch the pale imitations of the lower classes get together and be losers together. Undoubtedly, one could also say something about the lower classes coming together to watch well-to-do losers and grifters come together to grift on The Real Housewives of New York, New Jersey, Beverly Hills, or Khardasia. Meanwhile, I keep stumbling upon these books.

At any rate, a group of souses at a rundown bar in 1912 await the coming of Hickey, a salesman who comes for a bender every year on the owner’s birthday, and buys all the drinks. We get introduced to a couple of leftists, a couple of “tarts” (not prostitutes) run by the bartender (not pimp). We’ve got another “tart” who has been planning to marry the other “bartender.” We’ve got a number of people who’ve lost their jobs or positions, presumably for love of the bottle, who’ve thought to sober up and get their things together “tomorrow.” And when Hickey comes, he’s a changed man, sober, and ready to help them come to acceptance of their lots by showing them that they really don’t want to do those things at all.

So it’s long, it’s got a lot of characters, and it’s depressing. Which is why it keeps getting revived, sixty years later (the cover ties into the 1999 revival starring Kevin Spacey, Tony Danza, and Paul Giamatti; the 1966 version had Mr. Drummond Conraid Bain in a juicy role).

It might be the first Eugene O’Neill I’ve read; it won’t be the last, as I have A Moon for the Misbegotten which looks to be shorter.

Also, note that this is the second book in a row that I’ve completed which features the ultrabad word nigger (The House of Man being the first). Is this a sign of my latent racism, or just luck of the draw? The Internet would probably agree to the former. I bet the word is cut or will be cut from the newest revival of the play, though. Even when depicting a different time and place, whitey can’t say that, especially in anger (as it appears in this play).