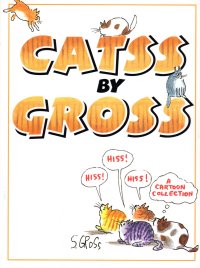 You know, I haven’t seen Ziggy in the local papers lately. I’m not sure if that’s because his presence on the funny pages are just so much like the atmosphere that they don’t stand out or if the Ziggy’s syndication has contracted. But reading through a bunch of Ziggy cartoons at once led me to realize what a sad sack Ziggy was. Kind of an everyman, a bit lonely, a bit Existential. Still, I got a couple of chuckles out of the collection which is more than I can say for some of the multi-panel strips (such as Sally Forth) from back in the day. Some of the humor refers to then-current events, so maybe my boys won’t understand when they make off with this book, but, as I sad, I chuckled.

I was pleased to see that Catss by Gross was not of a type with 101 Uses for a Dead Cat; apparently, Gross is the name of the cartoonist and not the type of humor one finds within. Instead, it’s a number of one-panel cartoons featuring cats. Several of them appeared in The New Yorker, so it’s that sort of dry, sophisticated pictured wit. I got a chuckle or two out of the book; not as much as the volume of Ziggy, but enough to be pleased to have read it (quickly).

Now, enough procrastinating; back to the Agatha Christie. After I read the other comic book I bought at ABC Books this week.