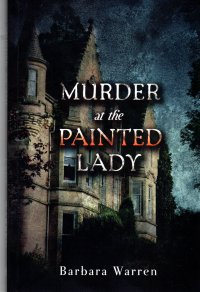 As I mentioned, my grandmother sent me a really nice omnibus edition of five Miss Marple novels by Agatha Christie. Which I put on my to-read shelves. Where I promptly lost it. I am not kidding; after I finished Deep and Swift, I went looking for it on the shelves in my office, and I could not find it. You would expect it would be on top or something, but it is not.

Instead, I found this book on top of the floor stack. I bought it at LibraryCon last year from a pleasant older woman whose product didn’t really fit the general science fiction/comic convention. It sounded like a British-styled cottage mystery. And so it was, although it is set in the Ozarks.

A young lady finds that she has inherited a fine old house in Stony Point, Missouri, that has run down a little bit from an estranged great aunt whom she tried once to visit but was rebuffed. The husband of her aunt, if only there was a word for that, was prosecuted for jewelry theft and went to prison, and the aunt withdrew from society as she tried to prove his innocence, and she left the house to the only relative who ever showed her any consideration along with the directive that she clear her uncle (oh, that’s the word) name.

But even before she decides to accept the house, a chilling phone call warns her against it. Suddenly, she’s got relatives coming out of the woodwork, literally, to try to wrest it from her. With the help of a conscientious contractor and friends she makes along the way, she works to restore the home and turn it into a bed-and-breakfast.

Oh, yeah, and one of the contenders for the home is murdered in the house–a house where she had no right to be and no signs of forced entry. I mean, murder is right in the title of the book. It’s not all a romance about a plucky young lady.

So it did fit into the cozy cottage mystery vibe, and I enjoyed it. I have a couple more from this author somewhere, but not on the stack immediately beneath this one. So I’ll probably enjoy them when I find them. Someday.