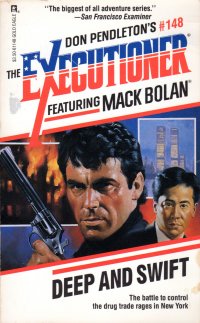 This is the next Executioner novel after Payback Game. The series has started to move between international thrillers and the more basic Bolan-against-the-mobs plots, with this one featuring Bolan in New York City fighting both sides of a drug turf war between Vietnamese gangs which include re-settled warriors from the Vietnam War whom Bolan knows and Columbians.

So, shoot-em-up set pieces which are not laughable. Some helpful sympathetic characters die. Some live. There’s a bit of innovation on how he penetrates the enemy stronghold at the end. So not a bad outing in the series, but not one of the more inventive ones.

Still, now that I am almost done with the Little House books, I’m starting to wonder how long it would take me to go through the remainder of the Executioner novels I own. Probably, with effort, years. So I will probably plug along at a little slower than that and maybe make it in a decade or so.

Another thing that struck me whilst reading this book is how little the titles have to do with the plot. It used to be that they had a place name in them that made for an indicator, at the very least, of where Bolan was going so that maybe, if you paid attention or were a Bolan scholar, you would know which plot goes with which book. But less so now.