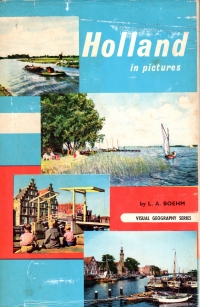 This volume is part of a series called Visual Geography Series which includes a number of foreign countries and Alaska and Hawaii. It’s got a color cover, but the interior photographs and maps are in black and white. It’s the second printing, though, so someone bought them.

The book includes sections on the geography, history and government, the people, and industry. In 1966, the country was coming back from the beating it took in World War II, so the industry was relatively fresh, and the people were proud to be reclaiming land from the sea and terraforming their little corner of Europe.

Of course, in the 1960s, the Mackle brothers were doing something similar to Marco Island, Florida. I wonder if the Dutch ran into the same problems, or how Holland has changed in the interim. One expects that the chapter on The People would be very different in the 21st century, but perhaps the text would be the same although the truth might be different indeed.

You know, I would not have minded seeing this Holland. My mother-in-law worked up a geneological study on my Noggle line for Christmas the year before last, and she gave me a calendar of Holland photos as apparently I have deep Dutch roots. I’ve read books set in Holland, including The Fall and Vendetta in Venice (well, partly). So it would have been a nice place to visit.

Although news in recent years leads me to believe that it’s more likely that I’ll travel to Europe as part of an expeditionary force than for fun. But, I guess, time will tell.