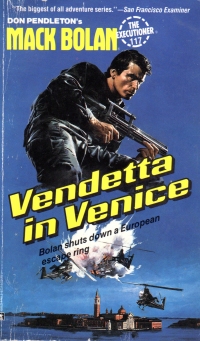 I decided to break up the serious reading with my first Mack Bolan book of the year. It’s been almost six months since Vietnam Fallout. This book, the 117th in the series, is only four later, but their increased girth means they’re no longer quick reads to pick up when I’m in between other lengthier works. They are the lengthier works.

In this book, Hal Brognola is in Amsterdam for a conference when he goes on a bit of a walkabout and ends up getting mistaken for a customer in a person smuggling ring. He taps Mack Bolan to investigate it. Bolan does and discovers it’s really one guy, mostly, and some time later he breaks it up and gets the girl.

The book differs from other characterizations of Bolan–instead of a hypercompetent wish fulfillment protagonist, Bolan here comes off as bit less competent and not necessarily even the driver of the action. He’s more passive, and there’s 250 pages of stuff happening to Bolan. The book only finishes up in Venice, so the title is a bit odd (but is alliterative).

I’d like to think I’m going to read more than two Bolan books this year–I have 72 in the Executioner and related titles to read–but unless they start getting better in the average, I might not. Especially at my galacial pace this year.