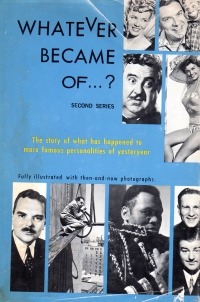 I mentioned I was reading this book, and now I have completed it.

As I said last week:

I hate to get ahead of my book report here, but it tells stories of famous people from the 1920s to the 1950s and where they are now (in the case of this, the second book, it’s 1968). I mean, these are mostly B and C celebrities from the era, movie and theater stars and athletes who had a brief run at the top. By 2019, one would ask “Who were these people in the first place?”

I find it very interesting because it’s showing that there’s nothing new under the sun. Many of these people have story arcs that match modern celebrities, with multiple divorces and different attempts to come back into the spotlight. But we in the twenty-frst century think we invented all of this stuff, and so many of these people have done it before.

I could stand pretty much on that as my book report, honestly. But the book was more compelling than that: it told me of a world, particularly an entertainment world, that one only glimpses sometimes in Lileks’ work. I recognized very few of the actors and actresses listed, and I recognized almost none of the movies or television programs they starred in. And I fancy myself something of a fan of old black-and-white films. So I’ve resolved to watch at the very least the ones I have in my catalog.

I learned a little more about stars from television programs I barely remember from my childhood (The Bowery Boys’ Leo Gorcey, Our Gang‘s Darla Hood) and the circumstances under which the shows were filmed. (Hey, did you realize that the new The Little Rascals film is twenty-five years old this year? Where are they now?)

I also want to postulate that the old studio system made the rags-to-riches-to-modest living storyline that appears over and over in this book possible, but that would be a facile assertion easily disproven by the A Different World star works at Trader Joe’s thing. So I guess it’s more human nature than anything else; the real story is that stars of our yesterday had more money to blow in their heydey before they came back down to earth (although maybe not Geoffrey Owens).

I also want to postulate that cable television (and now streaming outlets), the Internet, and reality television shows have made it so that actors and celebrities who don’t want to fade away or return to obscurity instead can just keep plugging along at substinence level (both monetarily and in ego gratification) almost indefinitely, and plastic surgery can ensure that they continue to look young or plastic until they die. But that’s a lot of thesis to defend based on 102 brief celebrity profiles from fifty(!) years ago and my own curmudgeonly nature.

So I’ll spare you the postulates.

At any rate, I hope I can remember some of the trivia that I’ve learned in this book (Morton Downey, Sr., was a singer and radio personality; the only man to win two Oscars for the same role was Harold Russell for his role in The Best Years of Our Lives). At the very least, I’ll get a couple blog posts out of it.

Apparently, this book is part of a series that ran for over a decade and ten or more volumes in those days before the Internet. If I come across them in the wild, I’ll surely pick them up, although I wouldn’t be eager to read a whole bunch of them in a row.

2 thoughts on “Book Report: Whatever Became Of…? Second Series by Richard Lamparski (1968)”