The meatloaf stain on my shoe. 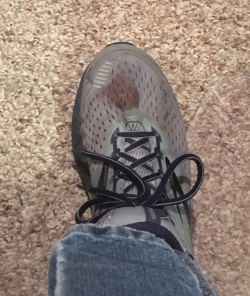 I was rearranging the contents of the lower level refrigerator the other night. We use it mostly for drinks, so it’s generally full of water bottles and sparkling water, but we also use it for kitchen refrigerator overflow. We cook certain items in quantity and freeze them for later use or for sharing with people who might need a meal at church. So it’s not uncommon to find ten hamburgers, a couple packages of salmon, and/or a couple of loaves of meatloaf in there.

We had a couple gallons of milk to fit in there until space opened in the upstairs refrigerator. My oldest brought it down and put it into the refrigerator, storing one of the gallons on its side, which is a recipe for disaster (young men, it seems, have whole cookbooks full of such recipes). So I started adjusting the contents to move the milk to the top shelf, but the carton containing cans of sparkling water caught one of the glass pans of meatloaf, which caught the other pan of meatloaf, and both tumbled a bit to the bottom of the refrigerator. Thankfully, no pans broke and no meatloafi (because meatloafus is from the Latin) spilled onto the floor.

However, the following day, I noted an odd splotch on one of my shoes, and I could not figure out what it was for a while. But then I realized that some of the grease from a meatloafus had spilled.

I tried to clean it off, but the water contacting the stain elicited the savory scent of fresh meatloaf.

So I’m walking around with a meatloaf stain on my shoe, and I’m sure that everyone is looking at it. I’m not due to replace this pair of shoes anytime soon, so I’ll probably walk around with it until it fades eventually in the rain and puddles. Although I’m not ruling out rolling in the mud like a freshly walked dog. Not just to cover the stain, but also because it makes people nervous when I do.

Hey, my eyes are up here!