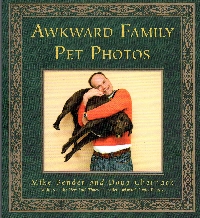 I bought this book a week ago, and clearly I could not wait to get into it even though the Green Bay Packers did not actually play football last Sunday. As a matter of fact, I wanted to finish a book, any book, while I work my way through another lengthy omnibus edition and continued to toil away at a book on serious philosophy.

Clearly, this is any book, which is not to say it’s a any good book.

You know, I have bought and read books based on Internet sites before (heaven forbid, Bad Cat). Most of the Internet books I get have some textual angle, though, like The Official Darwin Awards or Jump the Shark, which fares better in book form than cat pictures with captions.

This book is a little different from that, though: It’s based on the Awkward Family Photos site, where families with odd props or out-of-date fashions post images of themselves (or get themselves posted) for the lulz. Frankly, I’ve not gotten a lot out of the site itself because laughing at pictures of other people ain’t really my bag, baby (but being amused by textual accounts of their deaths is a different thing entirely, apparently). So when the Web site operators, the nominal authors of this volume, extended the brand to pictures of people with dated fashions and pets as their props. And published at least one book of selections.

I finished the book in an hour or two of browsing, but I’ll probably forego getting others in the series or even books of this type (Internet-site photos with captions) in the future, aside from what I already own, because I don’t enjoy them and I can’t lie to myself and say I learned something from them.

But I’ll still get around to anything like this I already own. And I might revisit the proclamation if it’s coming around to football season, I’m still watching football, and I feel like I’m low on books to browse during sporting events. Because I am nothing if undisciplined.