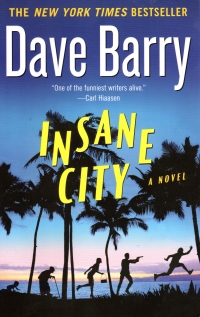 As you might remember, gentle reader, I bought this book on my my recent trip to Florida. I read Big Trouble ten years ago and liked it, and, hey, it’s Dave Barry. So it should be funny and a Florida book (which I wanted to read while in Florida).

The setup is this: A young man is preparing to wed the beautiful, smart, and a bit controlling daughter of an uberwealthy man. He and his groom’s men arrive in Miami, the location of the wedding, and have a bachelor party. The bachelor passes out under the table for a bit, and his party moves on without him, and he loses his luggage with the ring in it. The rest of the book follows the zany adventures of the groom trying to retrieve the ring, harbor illegal aliens in his room, and deal with the problems of the groom’s men. Much marijuana is smoked.

Sadly, although it could have been a tour-de-force akin to Downtown by Ed McBain, but the setup of this book requires a bunch of drinking and marijuana to set up the situations. The construction of the series of events seems very artficial, as though it were crafted specifically to be made into a film akin to The Hangover and the like.

So I really didn’t enjoy it that much. It didn’t carry me along, although it did give me a new phrase to use: “Well, the ape is in the car now.” Which I use to express that something not very enjoyable is moving along a little better. Because once the ape gets in the SUV in the book, it moves along a little better. Although I still didn’t really laugh at anything after it.