Gentle reader, this week I retired my children’s diaper bag. 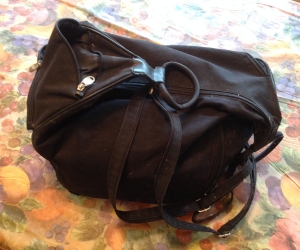 It’s not as though the lads have actually used diapers for five or six years now. However, since then, I’ve kept a change of clothing for each of them along with some first aid stuff and some wet wipes in the bag and have kept the bag in the back of the truck for emergencies. In the last five years, we’ve used the contents of the bag just once: A nosebleed at the nature center required a bit of clean-up and a new shirt. But I’ve kept up with the bag, swapping out clothing every year or so to ensure the sizes were up-to-date.

But we carry a number of gym bags often now to hold the children’s gis, and they often have a change of dirty clothes within them. And when it’s time to go shopping, we take out the bags to make room for the grocery. A couple of months ago, I didn’t put the diaper bag back in the back of the truck after unloading the groceries. It stayed on the garage floor until recently, when I decommissioned it.

It still held a large plastic bag full of diaper wipes probably from the actual diaper era. It also held a couple changes of clothes, where the largest were “new” clothing for my youngest child, and the smallest were hand-me-overs for another family. I found an emery board bearing the name of a candidate who lost a primary in 2010 and some Bactine that went into the bathrooms. But no bottle in the insulated pouch. A little bit of change to throw into the Lutheran Women’s Missionary League box.

And the diaper bag itself is bundled with other donations. Hopefully, someone will find it in a thrift shop and get some utility from it.

Me, I’m releasing an artifact from the time when I would push the oldest in a stroller for hours in Old Trees, Missouri. Before his brother came along and decided he could not be confined in a stroller or car seat for more than twenty minutes without inconsolable wailing. Ai, they were so young once, and so was I.