In 1990, a band called Londonbeat charted a song called “I’ve Been Thinking About You” which you sometimes hear on the radio even today. Well, I assume somewhere, you might; here in Springfield, it doesn’t fit into the three radio formats and the 1000 songs on their combined playlists at any given time.

In 1990, Londonbeat charted a follow-up single. Deb, a woman I hung around with and would eventually date briefly, loved Londonbeat, but I was just then growing my mullet and listening to album oriented rock at the time (which survives as classic rock, one of the three radio formats in Springfield–the other two being country and the greatest hits of all time which means music from the 1980s and 1990s and, when they’re feeling saucy, a Bruno Mars tune (but don’t worry about that program director who went a little too far–he’s fired!)).

Where was I before I digressed two sets of parentheses deep?

Oh, yes, I made light of Londonbeat, especially their second hit, which includes the lines:

“My God, he just hit her with his car,” I said because I have always had this grim sense of humor. Also, because it was the 1990s, a dark age, so I apologize for expressing the thought that the poet-narrator was talking about a woman.

So, at any rate, I made light of the song, and in the infrequent times I thought of Londonbeat over the years, I mostly remembered “I’ve Been Thinking About You” and could not remember the name of this song. Sometimes, I’d think that the last time I thought about Londonbeat a couple years ago, I could remember the name of the song, but I probably did not.

I know, I know, some of those times were in the 21st century, and if I’d been at a computer, I could have looked it up to see the name of the other song. Why, this sometimes even occurred in the smart phone era, where I could whip out a portable computer and I could look it up. But I didn’t, probably because I thought of Londonbeat while driving or in circumstances where I didn’t want to stare at a portable computer screen while life occurred in front of me.

However, this morning, I was at my computer thinking about Londonbeat, and I looked it up, and (re)discovered:

Now, more than twenty years later, I listen to it, and I think, Hey, that sounds okay. Maybe I’ll pick up a Londonbeat album now that I’m an old man and am branching out from the AOR.

Now, the challenge that will follow me around for the next twenty years: What was that other song by Soul II Soul? Like Londonbeat, Soul II Soul charted more than one song, so you don’t hear “Back to Life” on the radio on the One Hit Wonders special programming. 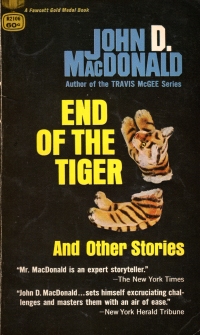 This book is a collection of short stories MacDonald wrote for various slicks throughout the 1950s. Although some of them feature a crime, others do not, so they show the range of things MacDonald could make interesting.

The collection is very solid, and MacDonald makes the main characters in the stories very approachable. It’s been far too long since I’ve read MacDonald (2012? Really?), but it won’t be long until I read more. He’s a joy to read, and the length of his books don’t make you think about how long they are. He balances description, plot, and dialog better than most writers I can think of, and his stories–even his short stories–have pretty interesting plots.

There’s a little contention at Nogglestead about which version of the song “Radioactive” is the best.

First, the original by Imagine Dragons:

Second, the cover by Within Temptation:

My beautiful wife thinks one is the definitive version, and I think the other is.

Please, let me know which you think is the better.

I don’t want to bias you, but clearly one version is slower and building, which is appropriate pacing for a song about waking up and reinvigorating, and one is up tempo and nice and all, but it doesn’t convey that same sense of awakening.

So I bought my children some bagged breakfast cereal because I’m a miser sometimes:

And whenever I serve it to them, I call them “Fruity…. DY-NO-BITES!”

Back in the latter part of the 1970s and the early part of the 1980s, I lived in a housing project myself, which explains why I identified more with J.J. and Dwayne from What’s Happening!! than any suburban-based sitcoms from the era.