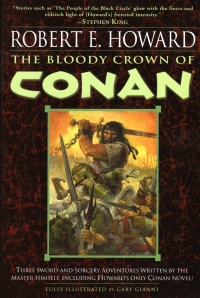 “The People of the Black Circle” features Conan carrying off the queen of a country to use as ransom for some of his followers. She’s seeking revenge on a band of magicians for the death of her brother, and as Conan and she flee from a magician following them, they team up to defeat the magicians.

“The Hour of the Dragon” is the only Conan novel, and it tells the story of how Conan loses the kingdom of Aquilonia and works to get it back.

“A Witch Shall Be Born” talks about a female ruler deposed by her presumed dead twin sister who was left to die at birth because she had a witch’s mark upon her. Instead of dying, she goes onto become a witch and impersonates her sister, a benevolent ruler, until Conan puts a stop to it.

One of the knocks I had on the first book was that the stories were a little formulaic and repetitive at times; with this book and the three stories within it, Howard has concocted some more elaborate plots that are difficult to sum up in the single sentences above. Which is good.

Not only am I continuing to be impressed with this series, but I think I’ll pick up some of Howard’s non-Conan work. Maybe with Christmas’s gift cards.