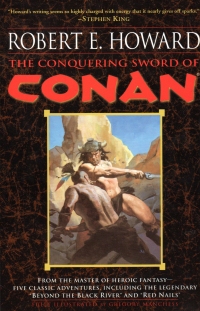 This book is the third of the three in the Conan set by Robert E. Howard.

This volume includes:
“The Servants of Bit-Yakin” wherein Conan climbs into a hidden redoubt with a temple in it. Priests seek audience from an oracle within the temple, and a faction has brought along a woman to act as the oracle and to order the priests to put Conan to the death. Conan, of course, has other plans, including collecting the mythical jewels said to be in the temple or nearby.

“Beyond the Black River” which takes place in the wilderness at the Pictish frontier. A shaman of the Picts is getting ready to lead the clans against settlers in the area, and Conan and some others try to delay them enough for the settlers to escape.

“The Black Stranger” A nobleman has brought his retinue to a coast of the Pictish wilderness to escape someone pursuing him. One day, pirates show up looking for a treasure rumored to be nearby, and the nobleman might have to ally with two competing bands of buccaneers to escape his pursuer. Then Conan shows up with knowledge of the treasure, and he plays all ends to get a ship of his own.

“Man-Eaters of Zamboula” deals with an inn and a town with a deadly secret–at night, certain savages collect those out-of-doors and those unlucky enough to stay in a particular inn for a grisly feast. And Conan finds himself in that room.

“Red Nails” finds Conan pursuing a woman warrior who has fled from their mercenary crew after fending off an unwanted advance with deadly result. Conan and the woman find a strange city on a plain where a society has degenerated to two warring factions opposing each other from different sides of the large building that is the city.

So these plots, again, are more complicated and less repetitive.

It’s interesting that these, the last of the Conan stories, often take place on the frontier and Conan takes on a certain Natty Bumpo/the Deerslayer vibe to him. I wonder how much Howard wanted to do that. Of course, in the writing chronology this holds true, but in the chronology of Conan’s life, he is not relocating further and further from civilization, and certainly not for the same reasons.

So I was a bit sad to have finished the Conan stories. I mean, I’ve got the other Howard things to go through sometime (after I buy them), and there are some non-Howard Conan books to read. But not the original. Not the original.

And Howard did all this by the time he was 30. Sometimes, when I was young, I thought I’d like to live the pulp writer lifestyle, banging out these works for a couple hundred bucks a throw and living in a seedy apartment while I did so. I never did make many sales. As a matter of fact, by the time I was 30, I’d only sold a single short story for five bucks to a magazine made on a photocopier. Ah, well, I guess I still have a chance to make it as a pixulp writer if I turn my mind to it.

And good reads like these Conan stories are just the thing to inspire one to become a writer.