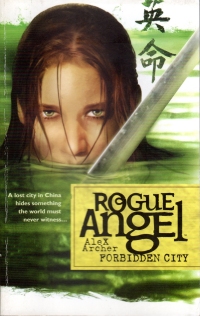 I first learned about this series from an advertisement in the Mack Bolan book, and when I saw an entry in the series down in Clever, I bought it. I picked this book up to read because:

The Rogue Angel series centers on an archeologist, a Lara Croft sort of archeologist (or an Indiana Jones sort of archeologist with a laptop). By the time this entry in the series comes along, she has recreated Joan of Arc’s sword, which she wears invisibly and can draw and use when needed–at which time it becomes visible. Two centuries-old wanderers, former student and teacher but now rivals, help her sometimes, but leave her in the dark mostly.

The book starts with Annja helping a Chinese man find his ancestor’s remains in a mining town near San Francisco. Creed does some research and pinpoints the location and exhumes the remains carefully, at which point the Chinese man would kill Annja for the belt buckle with the remains–but for the timely arrival of three marijuana growers afraid the DEA is onto their operation. Creed flees with the belt buckle and begins researching it. It might be the key to finding a lost Chinese City of Thieves–but a second component, a child’s toy, is in the hands of a Chinese CIA-trained assassin whose father was killed for the item.

The book is rich and vivid in a way that some of these series books (see A Daughter’s Revenge) are not. A number of different storylines come together–the story of the Chinese assassin, a Chinese archeologist near the City of Thieves, and Annja Creed’s dealings with television producers, and her benefactors. Sadly, though, they end up in a bit of a dungeon crawl in the lost city that slightly disappointed me. Also, Creed, our proxy, is a catalyst for the story, but she doesn’t understand what’s ultimately at stake because the old men don’t keep it from her.

Still, it’s a pretty nifty little paperback thriller. I liked it well enough that I’m thinking of ordering the first couple in the series from Amazon. That I’m going to buy other works by the author or in the series at retail price, new is the best endorsement of a book I give.