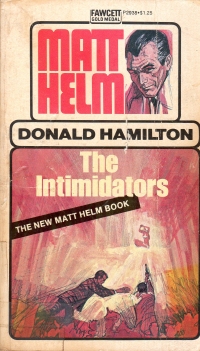 I’ve already read one Matt Helm book this year (The Ambushers and another book by Donald Hamilton (Murder Twice Told), so I guess it’s not a change of pace at all that I picked up this book.

Within it, Matt Helm gets involved in solving the disappearance of several boaters in the Bermuda Triangle area. He’s under the thumb of a rich Texan whose fiance is among the missing and who pulls some strings in Washington to get an agent on it. Helm is also running ahead of some assassins who are targeting him and from a former associate and lover who wants him dead–and whose help he needs to unravel the conspiracy.

It’s an interesting bit of thriller, a bit slower than The Mordida Man, but there really is a bit of a cut over somewhere there in the 1970s where the paperbacks become more punchy.

I enjoyed it, and I think I’m about out of Matt Helm books. I’ll have to hope for some luck at the autumn book sales.