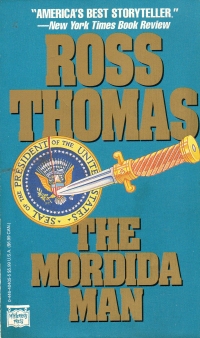 It’s been over a year since I read a Ross Thomas paperback (The Pork Choppers in November 2011), and I’ve been mostly reading paperbacks this year, so I picked up this book for a change-of-pace from my normal paperback haunts.

Unlike The Pork Choppers, this book is a straight ahead thriller. The plot stems around a secretive group that snatches the leader of a terrorist cell close to the ruling leader in Libya (a different colonel, as Khaddafy is overthrown in the near future of this 1981 novel). The Libyans think the CIA took him, so they snatch the president’s brother and hope to exchange the two; unfortunately, the terrorist died in the snatch, and it wasn’t the Americans. While the CIA muddles about trying to figure out who and where, a fixer summons the Mordida Man, a veteran and one-term Congressman known for getting important people out of the clutches of Mexican drug lords.

The book is fascinating: It’s a pretty good read, thirty-two years on, if you can relate to the olden days before cell phones and the Internet. It’s strange how undated elements of it are: the non-US vs. Soviet spymastering, for example, and that the bad guys are still bad guys 30 years later (contrast this for the extra suspension of disbelief you need for WWII thrillers: by the 1970s, our former enemies were our allies). There’s one bit of dated technology, though: the automatic garage door opener makes its appearance twice, including one where it’s sort of marvelled at.

But the book mixes up the good guys and the bad guys and has a third side playing against both that adds a dimension. Given the intra-side fighting, and you get an exciting read coupled with enough brutality that you realize that anyone is expendable in pursuit of the plot and the story.

Wikipedia says he was a well-respected thriller writer of his day, and I believe it.