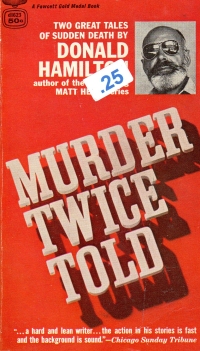 Fresh from the enjoyment of the Matt Helm book The Ambushers, I picked up this book, two of Hamilton’s novellas packaged together for the burgeoning Hamilton fan base.

The first, “Deadfall”, deals with a chemist who had been under suspicion for meeting with a beautiful female Communist agent, is confronted again at his new workplace by the FBI. The questioning leads to further suspicion, his resignation, a meeting with the woman whom he has not seen in a long time, and playing the FBI against the Communists as he seeks to clear his name and to keep his former fiance from murder charges. A bit slow for modern tastes, but I can see how it fit in with the times a bit. A nice bit of twist to it in that the demure former fiance turns out to be a Communist agent and the very attractive former Communist agent is really working for the FBI. It’s sort of a twist like from the film The Mask, but forty years ahead of the Jim Carrey film, of course.

The second, “The Black Cross”, deals with a married professor who has married an attractive young lady and brought her to his old hometown in New England, where she begins to chafe at the monotony of it. After a drunken row at a party, they are involved in a deadly automobile accident that kills her. In his dazed state, he thinks he sees a man murder his wife with a tire iron. The police discourage the man from pursuing a murder investigation, and he wanders around in a bit of a daze trying to figure out who might have killed her, uncovering some secrets from her youth, including connection with a West Coast night club owner and blackmail. Hamilton does a bit to get us wondering who’s on the professor’s side and who is not, and it eventually comes to a climax that clears it up.

The two novellas date from 1947 and 1949, so they’re immediate post-war pieces, but without the punch of the hard-boiled forties guys. The second, in particular, is a bit wordy and dense for the prose’s impact. I wonder if the GI Bill sending a bunch of guys to college made the paperback writers and magazine writers do this up. Sometimes, it’s effective, like in Ross MacDonald or John D. MacDonald, but sometimes it is not effective, and bad lofty pulp is worse than the punchy, pre-Gold Eagle sort of paperbacks. Or even many Gold Eagle things, for that matter.

So I like the Matt Helm series, where the first person narrator kinda tempers this impulse, but this book was not all that.