So Zero Hedge warns about the impact of changing diets on the global food supply:

Beginning with Malthus’ warning to the world and the Great Irish famine, David McWilliams (of Punk Economics) provides his typically succinct, profoundly fascinating, and graphically pleasing insights on the state of the global food economy. “What happens when hungry people panic?” is the question McWilliams poses; “they move to other parts of the world,” he rhetorically answers, adding that this could well be the story of the next 50 years on Earth as the rock of the insatiable demand of seven billion (soon-to-be-ten-billion) people smashes into the hard place of the planet’s limited resources to produce that one thing that keeps us all alive – food. The food dilemma is more complex though as it is really an energy dilemma – one that is not going away (on the downside). On the bright side, Malthus’ nightmare has yet to occur thanks to the ingenuity of humans. However, if all the world’s seven billion people consumer as much as the average American, it would require the resources of over five planet Earths to sustainably support all of us. So either the rest-of-the-world eats less to allow Americans to eat more or we are stuck! But it’s not just how much we eat, but what we eat…

They’re talking about one of those whiteboard cartoon YouTube videos which I haven’t yet had time to watch.

While most studies show that certain organic crops, such as corn, would have slightly lower yields and lower total production than conventional crops, the studies also show organic farming can feed the world, and in developing countries organic methods would increase food production and self-sufficiency.

Both of these things cannot be true. Well, they cannot be true unless there’s an unspoken premise in the second that the world eat organic bean burritos per day and give up their steaks and chicken. Which is not so unspoken in other parts of the movement.

But one of the things about organic farming and sustainable living lifestyles is that people who embrace them already have a pretty high standard of living to maintain and can afford to tut-tut the people who shop at Walmart to get a bit of what they get at Crate and Barrel. 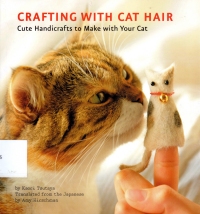 You might think that this book indicates I’ve gone off the rails for good. Oh, but no. This book cover cracked me up. Crafting…. with Cat Hair! I borrowed it from the library, and as we dwelt a little bit to let the kids play on the computers (which they don’t get to do at home), I kept percolating it to the top of my stack and laughing at it. I even got my beautiful wife to laugh at it with me a couple of times.

I mean. Crafting…. with Cat Hair! It’s from Japan (he said, as though that explains the crazy). It’s by a Japanese cat lady. And it was based on a blog she did that got some attention. Because of the crazy.

So, basically, the projects all involve felting the cat fur and using it to adorn something else, mostly other felt squares that you have to treat pretty delicately since cat hair isn’t the best felting material. Were I to felt a little image of a cat (cat iconography being a design of choice for these projects) onto the side of my fedora, for example, it wouldn’t last the first rain.

So it’s not something I’m going to try. So don’t think I’m spoiling Christmas tipping my hand that I looked through this book.

Mostly, I looked at the cover. And laughed. Crafting…. with Cat Hair!

Offstage, but ever present, is Gen. George S. Patton, “Old Guts and Glory,” the very real figure behind the semi-fictional Hollywood concoction.

Working as an independent IT contractor from my house leads me to some weird weeks, such as this one, which seemed to be composed of four Mondays.

Maybe tomorrow we can make it five for five. Tomorrow is Friday, isn’t it?

My wife brought in a keyboard she suspected was defunct and asked me if I would look at it. I did.

To do this, I popped them out of the keyboard housing, ground down the posts flush with the bottom of the key, and adhered some tie tacks and small pin findings to the back with some E6000.

One of the challenges with the project is the grinding; if you grind the key surface too thin, it makes a little dimple on the surface of the key.

Still, I have a number of them that turned out all right. My beautiful wife has taken to wearing a Shift key on occasion. I think the F1 Help key would be a wonderful fashion accessory for a technical writer.

The cost of each materials is about 35 cents each for the tie tack, a drop of glue, and the portion of a keyboard. Not too much. But I doubt all keys would be interesting to people.