Which is why stories like this one scare me:

redacted is a shy fourth-grader at Marion C. Early Elementary School with glasses and long brown hair. Each school day she rides school bus No. 9 from her rural Polk County home to the Morrisville school.

Last week, she told her mother, redacted, that a 6-year-old first-grader on the bus threatened to shoot her and a friend with a .22-caliber gun and to kill their families.

“All we said was hi and that was it,” redacted said. Despite the threat, redacted complains that the boy showed up back on her daughter’s bus within days and school authorities refused to tell her how the boy was disciplined.

Those authorities, as well as officials at other districts, say the alleged threat highlights the difficulty that school officials face in separating real threats from kid talk.

The boy’s grandfather said he’s been told that the child made the remarks in retaliation for what he believed was a taunt. The grandfather stressed:

School officials did not think it was much of an actual threat. They know the boy, know the parents (maybe), and probably scolded him.

But that’s not enough. The sheriff is now involved, the boy will be thoroughly run through a wringer, and the Springfield News-Leader weighs on the issue of whether schools should also have a zero tolerance policy in speech, too.

You’re saying, “What, Noggle, you’re reading cartoon books now and counting them in your annual total?” If you’ve paid attention, I’ve done this for a number of years. I’ve read these two books in the last two days as a brief respite from the 500+ page books I’m still working on, so deal with it. Or skip the report if you weren’t already.

At any rate, as I worked through these books, my wife mentioned that Dilbert was funnier than Garfield. Well, I guess it depends on what your life is. If you work at a white collar job, you probably get the jokes in Dilbert. If you have a cat, you can relate to Garfield. If you don’t live the lifestyle, then you’re not going to relate to the humor. I think both of them are amusing, and I don’t think myself any less sophisticated for it.

The Adams book is from the middle 1990s, but its humor remains topical enough to not be dated. It’s the same with the Garfield book, although its timing is my senior year of high school, so I get the extra little bit of nostalgia and have read this morning the Garfield cartoon that ran on my 18th birthday. I don’t know if I’ll get nostalgia kicks out of anything after 1995, so Scott Adams will never do that.

Well, there you have it: about as in-depth of a review of fourteen and twenty-one year old cartoon books as you might expect.

In the email box:

I wasn’t going to go to the book sale at Remington’s.

Wait, let me back up: I volunteered at the Friends of the Library book sale on Friday night, collecting the money as other people bought books and offering a running commentary to the customers about books they had. I was pretty adamant to the volunteer at the table with me that I was not going to go to the sale to buy anything because I already own enough books and I don’t have any room.

Of course, as with any of these things, I always find someone has bought something that I want specifically. In this case, a young man came through the line with Asimov’s Guide to the Bible, which I have not seen in the wild, but in retrospect that’s because I tend to skip over the religious section.

I told the guy about it, and he said these fateful words: “There’s another one, but it’s an older edition.”

So despite all of my assurances to my partner volunteer, since my beautiful wife and I had a ‘date night’ on half price day, I fell off the wagon. Loudly. 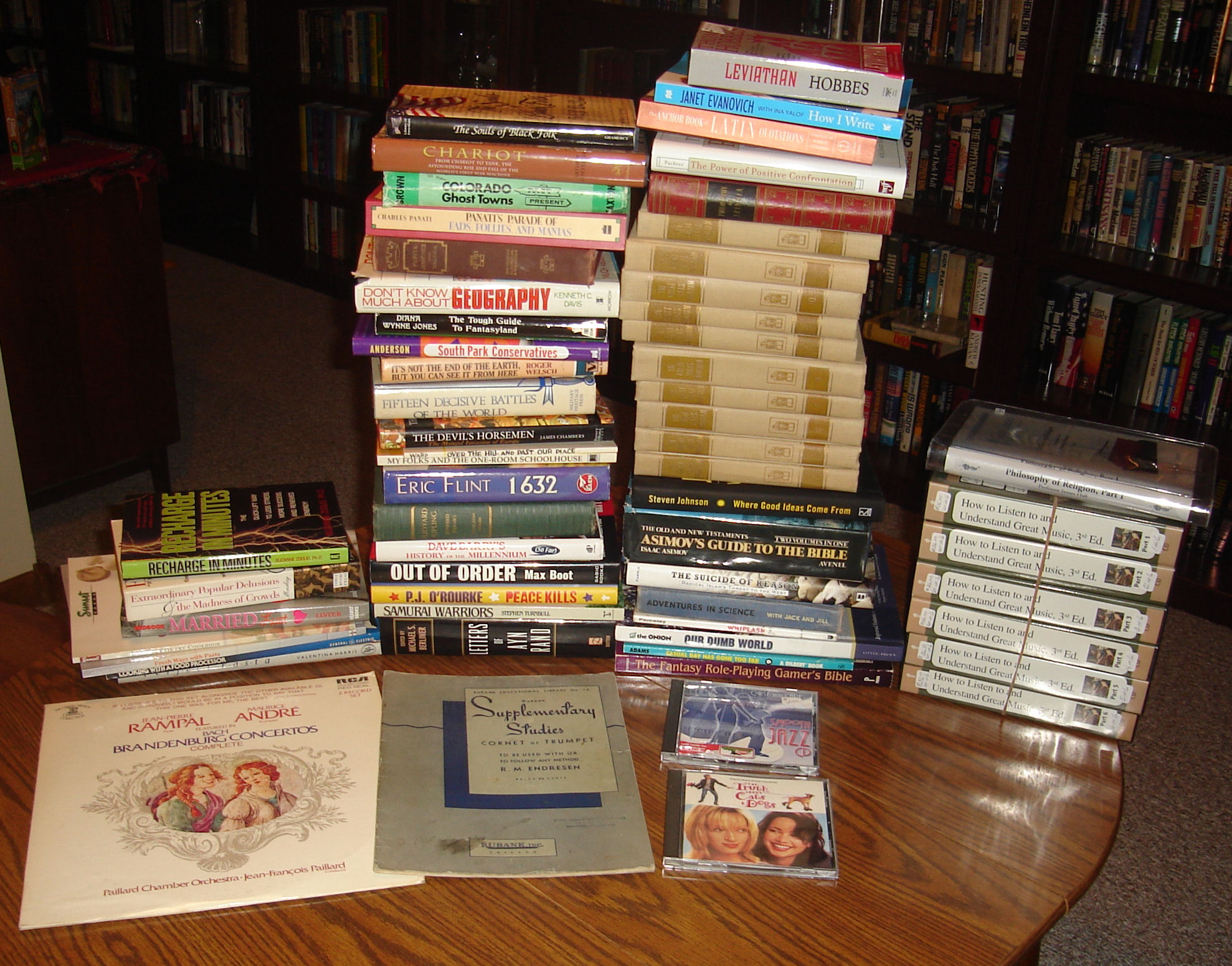 My wife bought a couple books, mostly cookbooks that she picked up while waiting me to finish, along with a record, some sheet music, and a CD. The Smooth Jazz CD is mine, but please note it’s not smooth jazz in format; it’s a collection of standards by Sinatra, Count Basie, and whatnot.

The total, after half-off, was $98.50. I got 42 books in total along with the CDs. I have already read the Dilbert book depicted within, which means I need to read 41 by October’s sale to keep pace.

The funny thing is how I almost blackout regarding what I buy. When my wife and I had dinner, I could barely recount what I bought. Some books I thought I’d picked up, I must have put back. I am such a glutton.

The United States military used military action in a sovereign state, a nuclear power with whom we’re not at war, and killed Osama Bin Laden. Hey, I’m a fan.

What I find sort of stunning and mostly not, though, is the triumphalism of my left-leaning friends who want to put the President back on his pedestal as though the President’s authorization of military action based on intelligence gleaned from interrogations he previously decried at a military base he previously decried represents a re-apotheosis instead of a continuation of ongoing action started by the previous administration.

I’d like to think that the enemies of the American Republic will see this as an example of the long memory and long reach of the American military. However, it will be too convenient and too accommodating to their particular narrative that this is the feckless action of a single American leader acting to prop up his flagging regime, and if this serves his purpose, he will leave them to plot and arm again. Some Americans will believe this is true. Perhaps it is at some level, but this is a continuation of American policy. The President did the right thing no matter who thinks so.

Will it stop al-Qaida? Hardly. I don’t even know how much of a figurehead bin Laden was nowadays. We haven’t heard about communications from him for some time. The loose organization of the outfit means you cannot stop it like you can topple a despotic regime by forcing the leader into exile or killing the leader.

I just hope it doesn’t lead to a Pakistani nuke making its way to Los Angeles or Long Beach.

UPDATE: Two wiser men than I speak: Richard Fernandez and Steven Den Beste, although Den Beste is merely predicting that which already happened as of 10:30 last night.

The word is he’s going to announce the death of Osama Bin Laden. Say what you will. 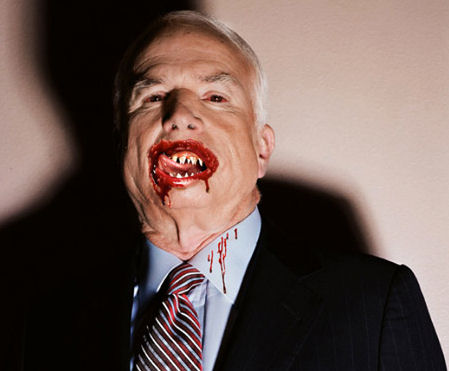 President John McCain would have eaten Bin Laden’s heart on the live feed. I can’t wait to see what Obama says.

10:04: How triumphant will it be if Osama Bin Laden died of old age?

10:07: If Osama Bin Laden died of old age, wouldn’t you, as a Taliban, throw a couple grenades on him and drag the smoking wreckage to the Americans to claim the reward?

10:08: Yeah, I’m facile and cynical, but personally, I like my thoughts better than Geraldo on Fox going, “Uh, uh, uh, the son of a bitch (I am tough! I curse on Cable TV!) is dead!” and the guys on CNN going, “This, after 8 years of failure and 2 years of earnestly leading from behind resulting in resolution (not triumph or victory, we’re above that!”

10:12: I planned to spend the last hour reading. Now, I’m listening to a Washington Post photographer talking on C-SPAN about taking pictures. The President’s delay is elevating me.

10:14: Remember when President Bush interrupted our nights to say he had Saddam Hussein? Frankly, I caught it on the morning news after a Christmas party, and President Bush spoke on Sunday morning about it. We didn’t get the “Here’s a big announcement on Sunday night. Hold the wire!” thing.

Makes me wonder what news Monday will bring about other things.

10:18: Fortunately, the adrenaline has worn off in the 49 minutes since the President was supposed to speak, and the speculation has gone from (personally) uh-oh to the Osama Bin Laden, yesterday’s villain, has been captured. Now, I hope I can stay awake until the President speaks. Once he starts, though, all bets are off.

10:22: I sent the link to this liveblog to Instapundit. Considering that I am timing out writing to the database when I try to update this post for my own echochamber, I daresay it will all fall down if I get an Instalanche.

Sorry, Trog, but Danica’s sponsor does me wrong sometimes.

10:27: Just checked in on Fox News. Geraldo is still asking the only sober Fox person qualified for live broadcast to ask him what he thinks the president should say.

Me, I think he will say, “Let me be clear: On one hand, there are some people who say that my predecessor failed. Some people say it was impossible. I have done it.”

10:31: Maybe we should have put Petraeus in charge of the CIA years ago. The man, and his reputation, get things done.

10:33: In the past, when I live-blogged, I had a second computer (a Macintosh) running live feeds so I could post and keep up. In the second decade of the 21st century, I’m playing Civilization IV in another window and am going to paste it to the Dutch in just a second here. I’ll be kinda upset when the president drops in to take credit for the efforts of 10 years of American military men.

10:34: Maybe it’s just that the President doesn’t have to go to work in the morning.

10:36: Osama Bin Laden, the leader of al-Qaida? Kinda like claiming that the Tea Party is astro-turf, hey?

10:36: The White House feed is offset, so he’s not looking at the camera. Like Michelle Bachmamn’s response to a previous speech. Wonder if it will make SNL.

10:40: President Obama is more butch than President Clinton, who pulled back at the last minute. Rock on! Maybe he should launch airstrikes against the leader of a foreign country under the auspices of the … and wait a minute….

10:41: It’s a good speech. I hope it doesn’t essentially throw Pakistan under the bus.

10:44: Except for the laundry list of things that we can put our minds to, as long as they’re as easy as killing one man.

Recap: Well, that was a very good speech. If George W. Bush had said it, I would have believed he meant all of it.

However, if “unity” means “we celebrate together the military accomplishments of this nation but submit to the programs of Washington that I dictate,” I’m still going to pass. There was a day when the Federal government did sort of hew to that protect us from foreign enemies abroad but let us drill for oil on our land and hope to strike it rich and let us take whatever means we think is necessary to provide for our own health, but those days have passed in the last two years.

Crikey, couldn’t he have called a press conference for tomorrow?