I received two Forbes subscription renewals in the mail the other day. The same day. With a $40 difference in a six month subscription rate.

First, a congratulations on my recent move and an offer to renew at $59.95 for 26 issues: 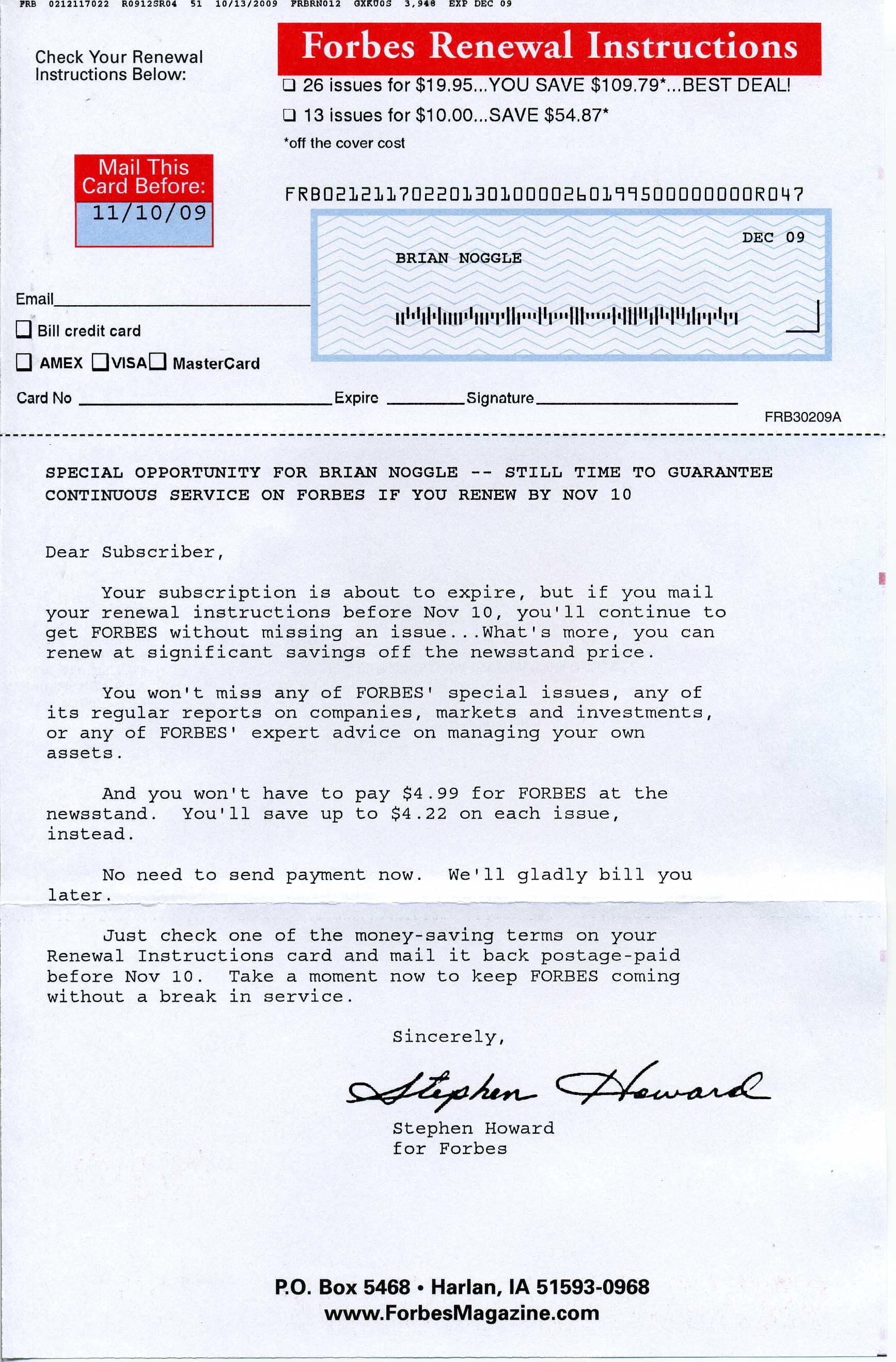 As you know, I take a larger number of magazines than I can read in a contemporary fashion. And you know one of the factors that makes me decide which ones to let expire?

How stupidly the circulation department treats you.

Forbes doesn’t rival Fortune and other Time-Warner magazines in trying to trick you. Yet.

We had the first meeting on Millennium in 1979. I ended up writing it six times. There were four different directors, and each time a new director came in I went over the whole thing with him and rewrote it. Each new director had his own ideas, and sometimes you’d gain something from that, but each time something’s always lost in the process, so that by the time it went in front of the cameras, a lot of the vision was lost.

Ergo, the timeline is as follows: In 1977, Varley writes the short story. In 1979, he begins on a screenplay. In 1983, the novel comes out. In 1989, a movie based on a revised screenplay comes out. Based on the special effects, I would have guessed that the movie was closer to the novel than the X-Files’ television debut. But there you go.

An air crash investigator finds some anomalies with the crash. A time traveller from the future leads a team to recover people scheduled to die in air crashes and replace them with semi-living bodies to repopulate the species or something. Their goals intersect and create a paradox. The book interweaves their point of view, whereas the movie retreads the timeline a bit to turn the story from the investigator’s tale to the woman’s testimony.

The book has more depth and detail, as indicated, with the futurists from further in the future and not knowing the source even of the time traveling apparatus that lets them go back. Additionally, the characters are fleshed out, the robot is not a poor C3P0 clone, and there are real questions of free will and manipulation of time. Plus, the woman is harder and more crazy. However, it ends with in a fashion similar to Arthur C. Clarke’s Rama series, where the Deus ex Machina is not a Machina at all.

An enjoyable read, and it made me watch the film again. You know, I haven’t told you how I came to view the film. In 1996 or so, I had a membership at Blockbuster and was wont to go rent a film or two to pass an idle evening (before I got addicted to reading as heavily as I do now). So I was browsing, and I thought the film’s box and teaser were interesting enough to warrant watching. I was disappointed with the film. Then, in 2007 or so, I was browsing Euclid Records in Webster Groves and found the DVD, and I thought, “Hmm, that looks interesting.” It was only when I started watching it that I realized I’d seen it a decade earlier. Now, with the viewing after reading the book, I’m up to 3. That’s probably more times than Cheryl Ladd and Kris Kristopherson have seen it combined.