A self-described anarchist/libertarian embraces government mandates when they improve his quality of life.

Once in a while we get real discussions here on MfBJN, and sometimes they don’t involve grief-stricken parents.

This book comes from early in McBain’s career, and it’s not even really a McBain book. Instead, it’s McBain finishing a book started by another author. However, unlike Robert B. Parker taking over a Raymond Chandler novel, McBain’s mannerisms and stock characterizations don’t appear. Maybe it’s too early in his career and he didn’t develop the stock. That said, this is a Craig Rice book that Ed McBain worked on.

It’s a little pulpy bit about two New York street photographers (who have had other capers in previous books) who decide to move to Hollywood to get rich and famous. Bingo, the brains of the outfit, almost thinks he has control of the situations and is atop things, but he’s not. Handsome, the athletic and good-looking part of the duo, seems to follow Bingo’s every word, but he has a tendency to go above and beyond his instructions in a beneficial way. Ergo, the characters have a sort of double-effect to them. On one hand, they seem buffoonish, but might only seem buffoonish on the surface.

In a series of events, they’re sold a mansion by a con man whose receipt carries the actual signature of the presumed murdered former owner. Then, the housekeeper and caretaker is actually killed in the house. As the duo run through their cash reserves hiring attorneys and whatnot, while trying to figure out who killed the previous owner, who killed the housekeeper, and whatever happened to April Robin, the starlet who first owned the house.

An amusing little book. I enjoyed it and wouldn’t mind reading the straight-up Craig Rice books in the series.

I lost several moments of Sarah Palin’s speech last night and didn’t catch the next paragraph after the John McCain uses his career to promote change because the cutaway shot went to a camera focused on a woman’s bosom:

Which the cameraman widened as quickly as he could, but ultimately too late to save me from near hysterical laughter: 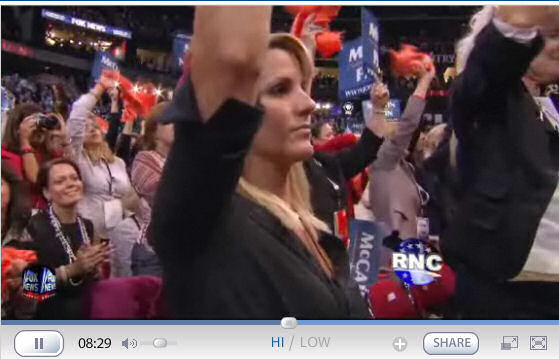 You can enjoy it for yourself:

I bet that cameraman got a talking to. Or a promotion to the CCTV security team.

Three sales tax increases are on the ballot this time around for St. Louis County.

Joseph Goeke, Republican director of the St. Louis County Election Board, said this would mark the first time that a county ballot included three such proposals.

“We went back through the records and couldn’t find another,” he said.

The three taxes, if passed, would apply countywide, not just in the unincorporated areas. Two of the taxes would affect every consumer; the third would affect only those who spend more than $2,000 on out-of-state purchases.

Notice that this would only prove to be a .75% increase to all sales in St. Louis County if these pass, not including sales taxes by your municipality or “community improvement district” (aka unaccountable unelected bureaucracy enrichment zones).

This is a Perry Mason novel. It clocks in at like 140 pages. I understand Gardner dictated two of these a month or something. As such, you should expect it’s a formulaic read, albeit one that’s pleasing.

This one details a plot where an heiress’s double approaches Mason to make sure she’s not getting chosen to be a patsy in something. She’s got an odd story to tell, and when a man appears dead in her apartment during her apparent kidnapping, Mason has to determine if his client is in on it.

On a side note, the 1960s technology that doesn’t appear so dated for this novel: the speaker phone. When Della hooks it up, it reads just like the speaker phone in the conference room where I used to work. 45 years later, it doesn’t read like they’re playing eight track tapes.

I wish I could, just once, run into Nancy Pelosi on the street, just so I could approach her and ask, “Mrs. Reagan?”