Because The Girl, The Gold Watch, and Everything had seventies hair.

I bought this book about a year and a half ago at Downtown Books in Milwaukee for $3.95. I don’t know why I was looking for an almost scholarly survey of private eye fiction, but I bought it.

As I mentioned, this book surveys the evolution of the private eye character within American fiction from its origin in the pulps through the middle 1980s (when the book was published). It identifies certain eras (early pulps, post WWII detectives, sixties touchy-feely detectives, and modern detectives) and then identifies certain seminal authors and their most famous or influential creations. The book includes Raymond Chandler, Robert B. Parker, Ross MacDonald, Brett Halliday, Mickey Spillane, and Richard S. Prather among the obvious. I’ve read books from each of these and probably work from among the others in the list. Oddly enough, these sorts of summary books not only inspire me to read more of these authors, but also to write more so I can hopefully get included in some of these volumes in the future. If I’m lucky.

(As for inside baseball, Roger L. Simon is only mentioned in this book when the author notes that a character is not as Jewish as Moses Wine. Simon and Wine do, however, make up a large portion of Sons of Sam Spade: The Private-Eye Novel in the 70s, which I read in college when I should have been attending Biology 001.)

For those of you who cannot get enough, here it is again: 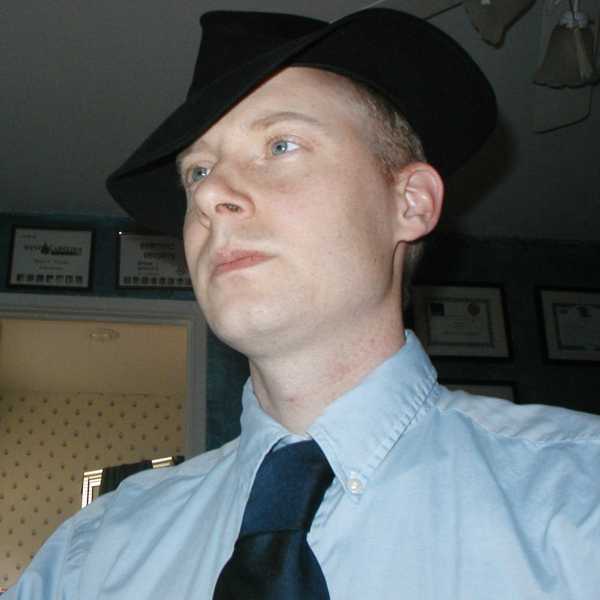 On the other hand, no thanks to Mamma, who lists me as the number one hit for Brian humping Louis. Contrary to the evidence, my relationship with the Tri Lambda was purely plutonic, and although we did take a long hike together, we did not stop to “smell the flowers.”

Kavik’s attorneys are descending upon retroCRUSH headquarters to demand recounts until he is on the list. Buck’s legal team, including several specialists from London, are watching Kavik’s story to see if it has a case as well.

The first Web Flash cartoon I’ve watched in a non-professional capacity. Because I know Will.

The city’s get-tough plan to silence booming car stereos was pulled Friday after the mayor and comptroller turned up the political pressure.

Alderman Craig Schmid’s proposal to allow police to impound cars with enhanced stereo equipment was criticized as overly broad and intrusive. The bill would have allowed the city to fine motorists with some sound systems straight from the factory, technically enabling police to take their cars regardless of whether music was pumping or not.

Headlines that focus on the minor bad thing that this legislation would address–annoying loud car sound systems–overlooks the far greater evil in its punishment–government seizure of private property for a small infraction.

Because I’m not so far from my youth to have forgotten how I would occasionally turn up my radio to probably inappropriate levels when a good song came on the radio. A ticket, I could have handled. Taking my car would have driven me to unemployment, as most of the places I lived in my twenties didn’t offer quick or convenient mass transit that could convey me twenty miles to my various places of underpaid employment.

Legislating to eliminate pet peeves by putting down their owners should never pass nor be considered seriously, but with 200 years of legislation and a thousand years of English common law behind them, our legislators have to make busy to citizens’ detriment.

Time to stop coddling the damn world if this is all the love we get in return:

Iran is the country most widely viewed as having a negative influence in the world, with the US in second place, a new poll for the BBC suggests.

The survey for the BBC World Service asked how 39,435 people in 33 nations across the globe saw various countries.

Freedom: The rest of the world views it negatively, who are we to think otherwise??

I got this book as a Christmas gift, and as I was looking for a quick read in my recent spate of nonfiction, so I picked it out of my hundreds of volumes that I have yet to read. It was a quick read.

I won’t go into too much depth with the book, as it doesn’t go much into depth itself. Of course, it’s preaching to the seminary here with its indictment of entire classifications of people whose individual goals counter the cohesion of our country for no real purpose except to aggrandize the individuals. It’s not a creative indemnification of the collective, but rather the buzzards shrieking that distracts a weakened nation.

Although he became a conservative pin-up author for Bias and Arrogance, Goldberg doesn’t just identify liberals, nor does he fall into pinning the tail on liberals because they’re liberals. He identifies destructive ideas and people who champion them, and I agreed with many of his selections.

So it’s a good book for a couple bucks, and it’s a great book for nothing. Just keep in mind you’re getting a list book and not a deep analysis of ideas, politics, or society.

A man is charged with assault after he allegedly beat a female teenage snowboarder who crashed into his daughter at Steamboat Ski Area over the weekend.

The collision knocked both girls to the ground but neither were seriously injured.

Randell Berg, of Littleton [Colorado], saw the crash and yelled profanities at the teen as he allegedly punched her in the head and neck, Steamboat police said.

Or maybe it’s because of Bush or something. Please, Michael Moore, help me understand how this can take place in Colorado, that microcosm for America.