The biggest mistakes people make when they move to San Francisco

The biggest, not included? Moving to San Francisco.

A new draft of the Environmental Protection Agency proposal, titled Strengthening Transparency in Regulatory Science, would require that scientists disclose all of their raw data, including confidential medical records, before the agency could consider an academic study’s conclusions.

So, basically, no more regulations made based on tl;dr interpretations of single, unrepeated studies.

So, you know, basically limiting science to science and not desired interpretations leading to desired law.

Yes, I know, the “Painter of Light” spelled his name differently. But why let that get in the way of a wry quip?

Or was she fired for not being good enough?

That’s only like $1000 per donkey. I can see why the killer isn’t bothering to collect the reward.

A portion of Highway 65 is planning to reopen.

Just what else does this portion of a highway have in mind for the future?

‘Shark Week’ starts off with another Cape Cod beach closing:

As viewers around the country begin to sink their teeth into Discovery’s annual “Shark Week,” the aquatic predators continue to lurk around the Cape, causing numerous beach closures over the weekend.

Another shark sighting shut down a Cape Cod beach Sunday, this time at Marconi when a lifeguard saw a shark fin about 40 yards from the shore. The beach was then shut down for an hour starting at 11:45 a.m., per the Atlantic White Shark Conservancy’s Sharktivity app.

Cape Cod rentals are having an unexpectedly slow summer:

Happen to have this week off and no plans? You might still find a vacancy on Cape Cod.

A Truro cottage set atop a coastal bluff with stairs to a private beach was still available on Friday — at a $1,100 discount. It was the first time in three decades that a summer week at the cottage went unclaimed, the owner said, and it’s not the only week still available.

A mystery for the ages!

Actually, the second article does mention the shark sightings.

Me, I’m worried because shark attacks were all in the news during the summer of 2001. Then some people did something that knocked the sharks out of the headlines.

Additionally, I question whether five plants is enough for a whole state.

You know what can ground planes really abruptly? Gravity.

I make jokes like this to cover my fear of flying. 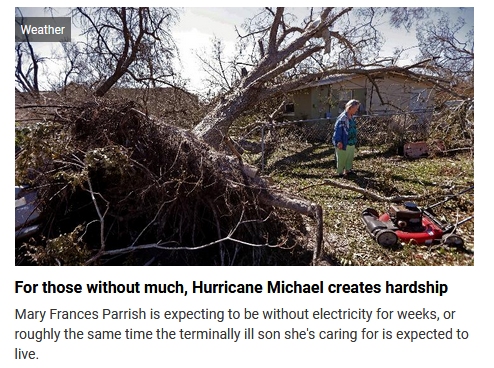 For those without mulch, Hurricane Michael is going to be bringing lower prices.

Sorry. I pass a local tree service company’s lot often, and they have mulch for sale, so when I see a downed tree and I think of mulch.

I know it’s unexpected that a headline gives the completely wrong impression, but on the home page of the Springfield News-Leader, we get this: 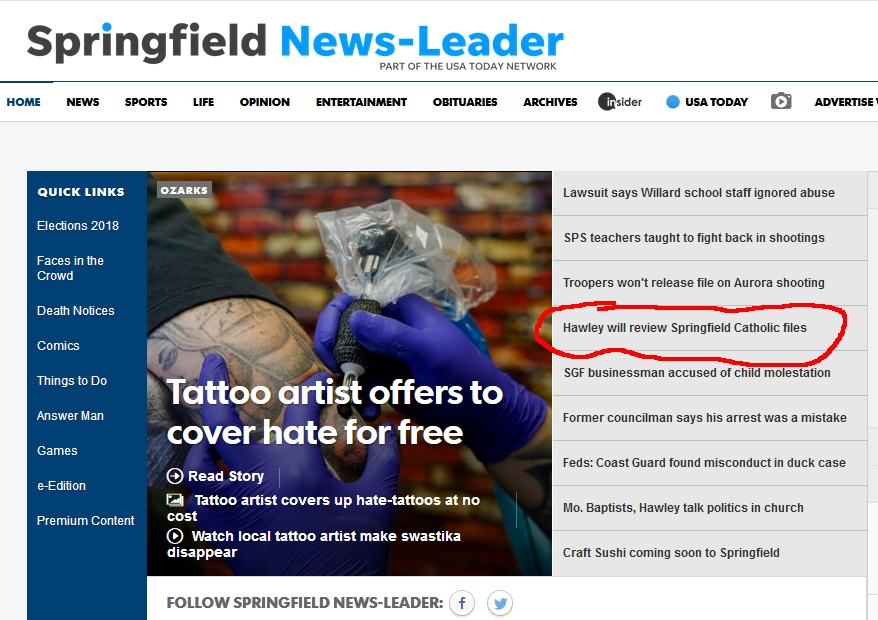 The headline on the actual story page is much clearer: Springfield-Cape Girardeau diocese to cooperate with Hawley’s clergy abuse investigation.

The short, pretty headline on the home page makes it sound like the state Attorney General is reviewing the school’s files in particular, which it is not.

No problem for a seaman used to rounding up orangutans that have gone overboard.

Sweet Christmas, when I wed, I gave my beautiful wife a much smaller ring. I paid more because the diamond had but a few very small inclusions.

But her ring is only a couple of ounces.

I must try harder.

Man gets prison time for 11-pound cocaine bust in Strafford

Maybe he should have stuck to ice sculpture.

Or Turkic, whichever the people from the tribe predominantly associated with the nation state of Turkey calls themselves:

Dan Rather launching newscast on The Young Turks network.

Perhaps his news magazine will be sandwiched between thirty year old episodes of The Golden Girls.

Although perhaps Dan Rather does represent “young” amongst people who watch television news.

Really, you would expect behavior from the Lions Club, but:

I can kid because both people survived, and possibly learned a lesson.

What do you get for that someone who has everything? A lifetime in a hospital.