On Monday, two weeks after I buried Athena, I heard a meow from my open office window. I stood up and looked out to see if it was Peirce, the black cat that hung around and helped himself to some of Athena’s food. And I looked down, and it was a black kitten. Who hopped up onto the sill of my window and meowed at me. 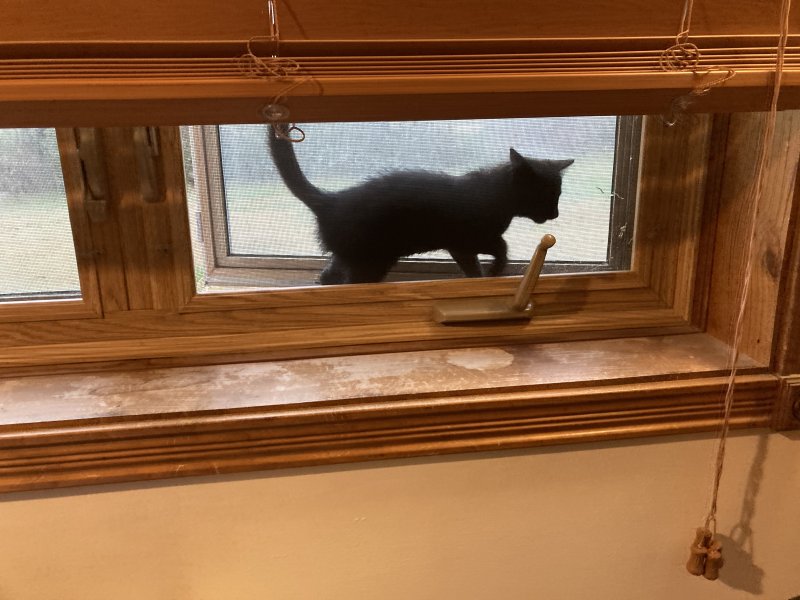 I told my beautiful wife about it, and I went back into the house. She came to see the kitten, and she found it–beside the house. Another kitten was meowing from the windbreak, so I went into our little wooded corner and found another little kitten about three feet up a tree, hanging on the trunk like a koala bear. I brought them both to our patio, and we petted them and gave them water and food, and they hung out. Sometimes literally on the window of my wife’s office which faces the patio. 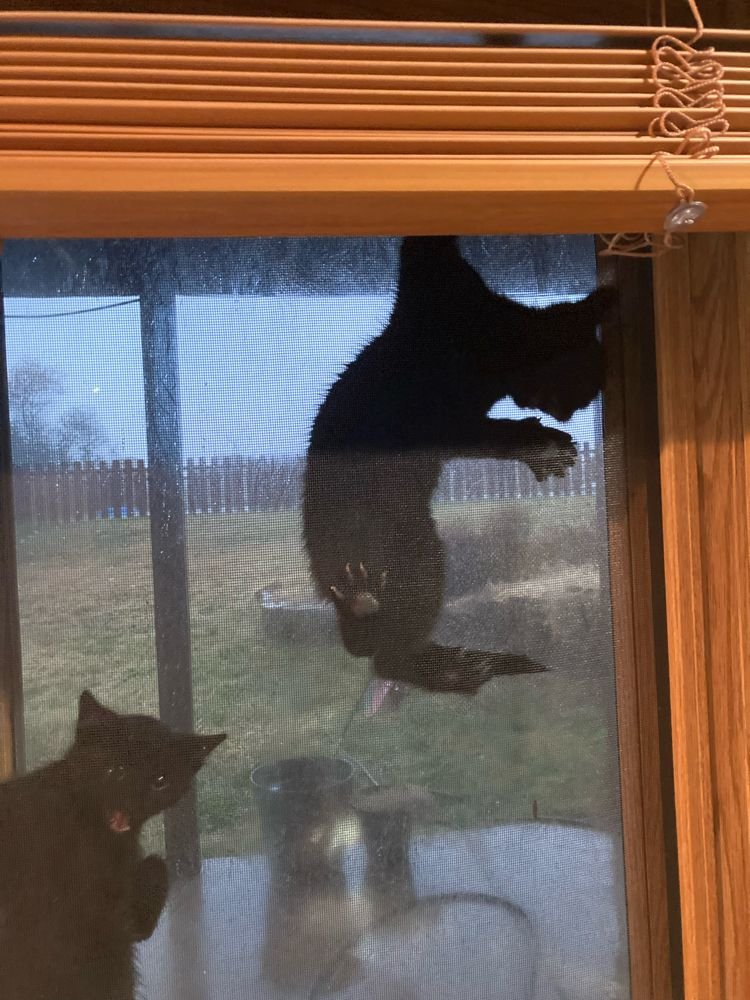 So we asked around “Who wants kittens?” and only the wife of the kyoshi at my dojo said she could use some barn cats since she lost four recently.

My wife was pretty adamant that she did not want more cats, although she did like sitting on the patio petting them. I, on the other hand, figured it was but a matter of time. I didn’t want them out there, motherless, subject to the predation that took our adult cat. I mean, these kittens were the size for hawks to carry off. I expected to press the issue the beginning of next week, of bringing them in to foster (c’mon, man, that’s foster-to-own, ya know?), but on Thursday night, we went out to say good night to the kittens, and we could not find them.

So we instituted a brief search–I went around looking for remains, but I did not expect to find any. If one of the cats had disappeared, I would have been more worried. My wife found them under one of the vehicles in the driveway, and now their coming in was her idea. 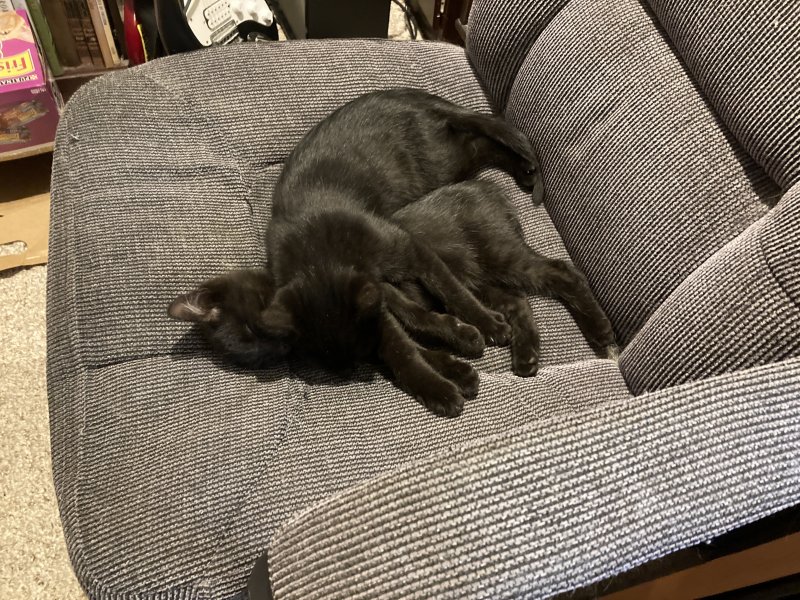 So they’re in my office, sequestered. Kinda maybe fostered, but most likely ours now. They have an appointment with the vet in a couple weeks, at which time they will be properly identified as male or female–initial guess was two girls, but my wife is unsure about one. But their initial designators are Desdemona and Cleopatra. Maybe one will be Machiavelli.

It has been eight years (!) since Aurora spent the last of her months in my office, so it has been some time since we’ve had a cat shut in here. Chimera was in here with me a couple of weeks when he arrived, but that was before Aurora’s decline.

Eventually, we will integrate them with the other cats. They might think Isis, our adult black cat, is their mother (we assume Peirce is the daddy). I don’t think Roark would like to become acquainted with kittens in his dotage. The wild card is Chimera, who wanted Roark to be his buddy–he’s about to get two small cats who will want to be his friend and to cuddle with him and play with him, and he might not like that at all.

But time will tell.

On the other hand, it does represent an opportunity for lots of new cat photographs. 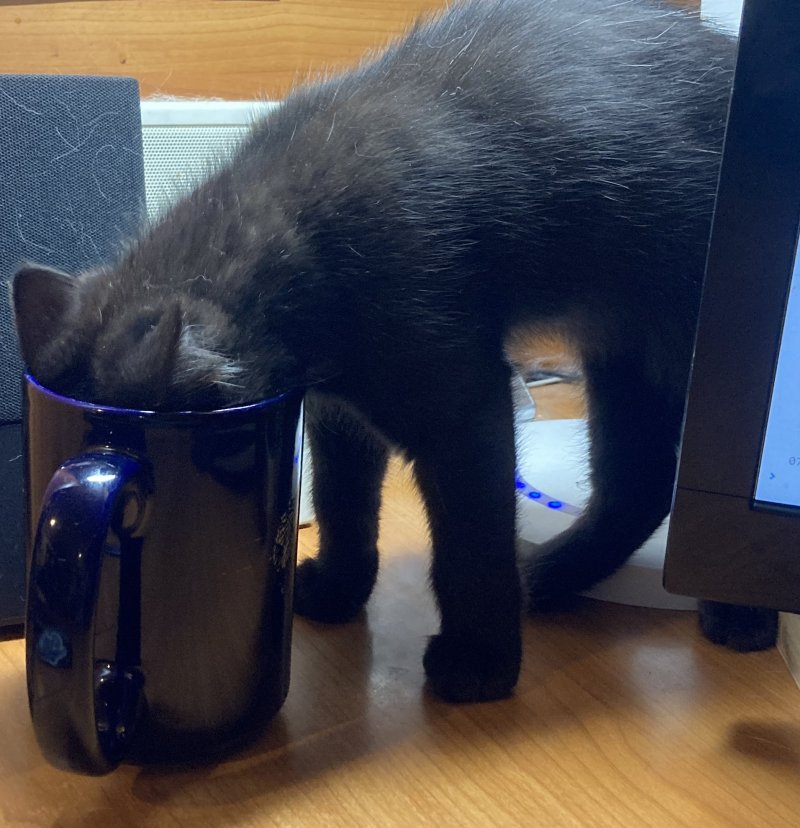 Which is good, as one of my contracts involves testing with photos, and my existing cat photos were getting kind of stale.