We lost Athena on Sunday night.

Lost makes it sound so simple.

I mentioned not long after we lost Foot that we had put one of our cats outside as she had, and had for a long time, a problem with inappropriate urination. As in, if she even bothered to head to the room with the cat litter boxes, she would pee next to them. More often, though, she peed in the boys’ bedrooms or the living room when the boys’ doors were closed.

So after our vacation in June, we moved her out to our backyard.

Nogglestead has a small back yard enclosed by a picket fence, and we’ve had cats out there before. Back in the old days, when Ajax and Galt took to urinating on my desk, we moved them out there, too, and they stayed out there for a year or so, making new friends with local cats Valjean and Jigsaw, before Ajax died peacefully of kidney disease. Then we brought Galt in, and he died of old age in the house again.

So we had some experience with it. And Athena seemed happier out there. 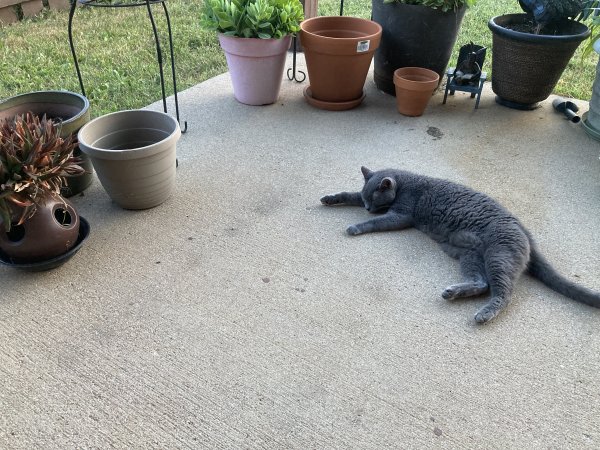 She was a bit of a brawler in the house. Scratch that: she did not like the other cats, and she would hiss and spit at them, and then she would run and hide when they battered her as a result. Initially, she was intrigued by Peirce, the long black cat in the neighborhood who started hanging around Nogglestead. She would follow him a bit and see what he was doing. But, over time, she got cantankerous with him, too, and would chase him off a bit.

Last week, when we were coming home from a volleyball game after dark, we were surprised to see her in the driveway. She’d spent most of her time in the back yard, on the patio or under the deck, and she was shy about even coming into the swimming pool area, separately fenced. My beautiful wife had encouraged her to come out to the gardens with her, but she seemed reluctant. Until last week, maybe.

Last week, she went to the vet and got her feline leukemia booster. On Sunday afternoon, I gave her her monthly anti-flea and anti-tick drops. On Sunday evening around nine-thirty, I sat on the deck and petted her a little before retiring.

On Monday morning, I came out to feed her right after sunrise as was my wont, and she did not come crying out from under the deck. I noticed that the water dish had been upset–it had spilled its contents, even though it was on its base. I was immediately concerned, and I walked around the house and out to the road to see if I could spot her. And I did not.

But when I went out to set up the smoker for our dinner, I saw turkey vultures in the far back yard, and I knew.

Coyotes, probably, and turkey vultures did not leave much of her. Mostly a skeleton with enough grey fur at the end of her tail and on one paw to know.

I sat my beautiful wife down to tell her, cancelled a planned martial arts class, and then I buried Athena.

Her death was striking. It was sudden, unlike Foot’s or any of the other cats who have had fairly long declines. Although it was not acutely our decision to euthanize her, it was our decision to put her out of the house. We hear the coyotes nightly, but we perhaps underestimated the danger from them as the other cats had survived for a long period of time staying close to home, in the enclosed back yard.

So there’s guilt, there’s a bit of trauma of having seen a pet reduced to nature’s use, there’s sadness, and there’s recognition, again, of our own mortality–at any time, we, too, could be gone as suddenly–but also knowing that the Big Bopper is on borrowed time–he is old and skinny, and we thought he’d stopped eating a couple of weeks ago, so we’ve been preparing for his end. Which will probably, sooner rather than later, mean that we will have lost three cats in six or nine months. Which is far faster than the first generation left us.

But enough of the maudlin–but for this post, I will likely not remember the actual acute experience of Monday, and will instead remember the better parts of Athena:

She was a particular cat, and a bit of a peculiar cat, and she will be remembered fondly. Even the making Nogglestead smell like cat pee to the point that I did not want to invite anyone over and did not want to replace the 20-something year old carpeting (which smelled of dog when we viewed the house) because it would have been ruined quickly. Ay, the conflicted I feel. Pleased to have put her out, sad about how it turned out. Perhaps if we had put another cat out with her, as we did with Ajax and Galt….

Well, the self-recriminations, too, will pass with time.