As you might recall, gentle reader, we had a cat euthanized last month. 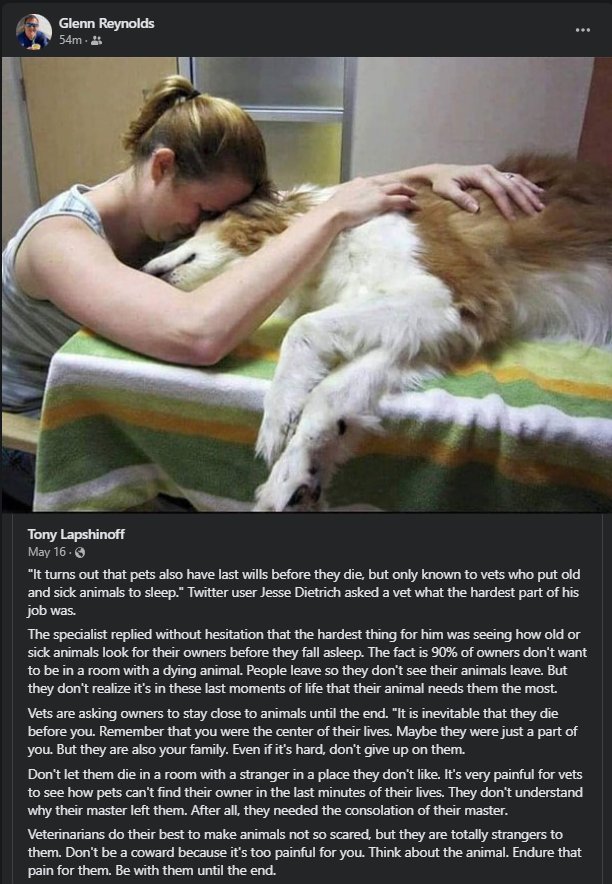 “It turns out that pets also have last wills before they die, but only known to vets who put old and sick animals to sleep.” Twitter user Jesse Dietrich asked a vet what the hardest part of his job was.

The specialist replied without hesitation that the hardest thing for him was seeing how old or sick animals look for their owners before they fall asleep. The fact is 90% of owners don’t want to be in a room with a dying animal. People leave so they don’t see their animals leave. But they don’t realize it’s in these last moments of life that their animal needs them the most.

Vets are asking owners to stay close to animals until the end. “It is inevitable that they die before you. Remember that you were the center of their lives. Maybe they were just a part of you. But they are also your family. Even if it’s hard, don’t give up on them.

Don’t let them die in a room with a stranger in a place they don’t like. It’s very painful for vets to see how pets can’t find their owner in the last minutes of their lives. They don’t understand why their master left them. After all, they needed the consolation of their master.

Veterinarians do their best to make animals not so scared, but they are totally strangers to them. Don’t be a coward because it’s too painful for you. Think about the animal. Endure that pain for them. Be with them until the end.

You know, we’ve had to put down four cats and a dog over the years, and I’ve always been with them to the end. Galt expired on my wife’s lap as we were on the way to have him euthanized, and Ajax died in the yard.