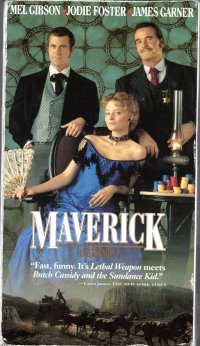 After we watched Horse Soldiers, I thought I’d show the boys a slightly more modern Western, this one a comedy from the mid-1990s (released a year after Tombstone). When you think about modern films mining old properties for material, remember that this movie was an update of James Garner’s television series from the late 1950s.

In the film, Mel Gibson plays Bret Maverick, a gambler looking to make enough to stake a place in the first world championship of poker. He’s a little short, but he tries to gamble and grift his way to St. Louis. He meets the Jodie Foster character, who is also a poker player and bit of a con artist, as we come to know. James Garner himself is introduced as a well-known lawman. Someone is trying to stop Maverick from getting to the card game, and the movie goes through a number of set pieces where Maverick tries to collect old debts only to encounter some trouble or another. He finally makes it to the card game on a riverboat, and when he wins the pot, the lawman steals it, so Maverick goes to hunt him down and finds the lawman was partners with the organizer of the tournament.

So it’s a pretty fun romp filled with outlandish situations and featuring numerous cameos by Western movie stars, country singers, and Danny Glover as a bank robber who is getting too old for this shit. My boys didn’t understand a lot of the references and the “Hey, there’s that guy!” element of the movie, but the oldest did recognize Waylon Jennings (good boy!) but only from being in The Highwaymen (well, it’s something).

So I enjoyed it, and I was pleased to see that the problems I’d experienced with the picture in Tombstone was because that VHS was so worn; this one looked good, which means it’s not in the electronica again.

So I might watch this again sometime, and I have the physical media to make that possible for as long as the lights stay on.