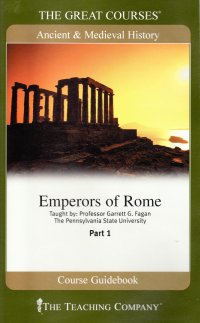 After Lost Christianities, I thought I would pick up something that I could listen to with the boys in the car. I didn’t end up doing so, though, as many of the lectures were bloody and brutal, especially when it came to succession. So it took me a while to get through the series since my time was limited in the car.

So, briefly, I can name the Roman emperors in order from Augustus to, what, Severius? But once we get to the next round of civil wars, we get a bunch of claimants and soldier-emperors, and I lose track a bit.

So, what does one learn from this audio course? Well, some interesting trivia about Rome, some better sense of how it was governed, some of the war situations on the frontier, and some of the architectural contributions. How it went in cycles from strongman to brief dynasty to civil war to strongman. A couple of the emperors were considered crazy and a couple were considered ‘good’ or beneficial to the empire or history as a whole, but that the reigns had ups and downs and most of the impact was felt by Rome and the court. Which is somewhat consoling in this the modern world, but our panopticon internet and our incessant need to say “Look at me!” makes it easier for the would-be emperors and their hangers-on in these days. Listen to me talking about it–I am at eighteen years and running on this blog, ainna?

At any rate, an interesting listen: The lecturer describes the emperors’ reigns narratively but for a few survey lectures that explore the emperors’ changing relationships with the city, the elite, the people, the empire, and the soldiers.

So what would I tell my uncle I remember from the course? Probably passing familiarity with emperors by name and relative length of their tenures. A little about Trajan and Hadrian that I hadn’t known reinforcement of some received judgments about others like Caligula and Nero. A bit more reinforcement of early Christian history where it intersects with the Roman empire.

So it was about eighteen hours of listening over a couple of months, and it’ll probably be a while before I get through another as the school year has ended and with it my daily commute taking the youngest to school daily.