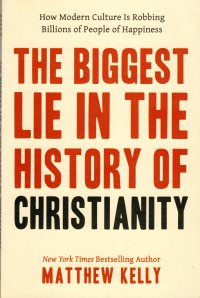 My wife spotted this book on my to-read shelves and brought it to my attention: I should read it soon, or it might disappear from my shelves. She has read other things by the author, a three-time cancer survivor, so that might be how she knows of him. So after I finished the Winter 2021 Reading Challenge, I picked it up.

It’s a contemporary Christian….self-help book? It’s in the vein of The Power of Positive Thinking or Eat the Cookie…Buy the Shoes with a bit of focus, I guess, on living as a Christian in the 21st century and helping to expand the Church’s reach/the power of the Church. The author is either first or also a business consultant, so it has a lot of focus on large-scale outcomes and uses the term continuous improvement referring to the experience of Christianity.

Spoiler alert: The biggest lie in the history of Christianity is that holiness, living a holy life, is impossible in the 21st century.

The book is a little bifurcated: He creates the concept of Holy Moments, essentially paying-it-forward by doing nice things for people to represent Christianity well, and then, rather unrelatedly, he then talks about The Church as if it’s some monolith that need Christians to band together to maximize its influence and whatnot. I am not sure that he leads from one to the other very well, and I’m not sure you can do that very well. I mean, Christianity is about one’s own relationship with Christ; once you start talking about the organization of the Church, especially as some ecumenical megalith, you start losing me.

He talks, briefly, about the Church doing a big thing, all Christians together:

Everybody knows the world needs changing. We may disagree with our non-Christian sisters and brothers about what changes are needed, but the need for change itself is indisputable. And so, the key to repositioning Christianity as an incredibly positive and powerful force in our culture is what I like to call a 100 percent issue. A 100 percent issue is one that no reasonable, rational man or woman of goodwill can disagree with. For example, I believe that no child in the United States should go to be hungry. That’s a 100 percent issue.

If I said no American should go to bed hungry at night, it would no longer be a 100 percent issue. Some people would argue that many of the hungry and homeless are lazy, are voluntarily abusing substances, and have chosen the lifestyle they are living. They may be right. I don’t know. It doesn’t matter right now, because while some people may disagree about every American, everyone agrees that no American child should go hungry. This is a 100 percent issue, which means nobody can disagree with you without looking foolish at the very least.

Now, just one minute, Admiral. Before I, who might not be reasonable, rational, or of goodwill, will check those terms and conditions:

The book and its conception of the Holy Moment can be useful as a frame of thinking of small acts of kindness that a Christian can perform every day to act more according to the teachings of the New Testament, but too often it kind of veers into the macro. Also, it really kind of goes from deontology–do good works because it’s the right thing to do or because it’s God’s will–to teleology–do good works to show everyone what good Christians do or to make the Church look good/broaden its power and influence. That is, do good with a worldly goal in mind.

So, yeah, not buying it.

At any rate, the book is only 114 pages, but it took a fair amount of themeatic repetition to get there. So I will mark this into my library database and annual reading total, but instead of onto the read shelves, I will probably pass it onto my wife. Perhaps she will enjoy it or get more from it than I.

Oh, and other things I marked upon which to comment:

Other common lies today include: Christians hate all non-Christians; Christians think everyone else is going to hell; smart people are not Christian; Christianity isn’t dying and won’t be around for much longer.

I disclaim that I did not even complete my (Catholic) theology minor at the university (I dropped Philosophy and Theology because it was an 8am class, had used all my absences by midterms, and thought I was getting a worse grade in it than I was), but I am pretty sure that the the only way to the Father is through the Son is still taken pretty seriously if not stridently. Some denominations in the diverse monolith that is the Church emphasize it more than others, but I’m not sure that those who have eliminated it constitute a majority. So it’s not a lie told about Christians.

A thing of beauty is a joy for ever:
Its loveliness increases; it will never
Pass into nothingness; but still will keep
A bower quiet for us, and a sleep
Full of sweet dreams, and health, and quiet breathing. 5
Therefore, on every morrow, are we wreathing
A flowery band to bind us to the earth,
Spite of despondence, of the inhuman dearth
Of noble natures, of the gloomy days,
Of all the unhealthy and o’er-darkened ways 10
Made for our searching: yes, in spite of all,
Some shape of beauty moves away the pall
From our dark spirits. Such the sun, the moon,
Trees old and young, sprouting a shady boon
For simple sheep; and such are daffodils 15
With the green world they live in; and clear rills
That for themselves a cooling covert make
’Gainst the hot season; the mid forest brake,
Rich with a sprinkling of fair musk-rose blooms:
And such too is the grandeur of the dooms 20
We have imagined for the mighty dead;
All lovely tales that we have heard or read:
An endless fountain of immortal drink,
Pouring unto us from the heaven’s brink.

Keats is talking about actual things, earthly things that one can enjoy, externally triggering joy, over and over again. Hey, I know the feeling. See also my preference for personal relics as physical triggers for memories I might not remember otherwise.

Also, this might be a good time to drop in a little design knock on this book. A lot of books have callouts, where they put little snippets of the text in a larger font on the page so you can remember it when you’re flipping back through the book or to emphasize a point. When I read books that use them, I skip the larger text because it’s generally a little aphorism out of context.

This book, however, puts whole paragraphs in larger font; text which does not otherwise appear, so they’re not callouts, they’re emphasized part of the text. The stuff the author would underline for you if he could, and it’s whole paragraphs. 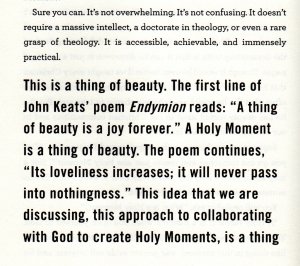 I think that’s poor design. And you can take it to the bank since the closest thing I have to an official review of my last collection of poetry was the poetry sucks, but the design is awesome!

It is also important to note that we need God’s grace to create Holy Moments. We can’t do this alone. This is not self-empowerment.

I always feel smart when I can name the heresy.

Again, this is the greatest dispute that I have with the book. It talks about doing good and being holy as part of a strategy with an earthly goal in mind. I think that any resurgence of Christianity and traditional morals must be a by-product of people just doing it, not the goal of a strategy.

Kelly starts out a chapter called “Everyday Miracles” with a story that must be a parable, but:

A thousand years ago, a missionary was visiting a village on a small island deep in the Amazon, when he came upon three old friends talking, singing, and laughing.

I think the parable is about how the Church and its official emissaries cannot teach holiness to Christians who are already holy. I don’t think this squares with the Church having an official strategy. But I do know that missionaries weren’t visiting the Amazon a thousand years ago. The official Church wasn’t even going to retake the Holy Land in the Crusades yet, and Constantinople and the Byzantine Empire hadn’t fallen.

It’s a glaring mistake. But the book itself has a bit of a dashed-off quality.

It looks like the author dashes off a couple books like this every year. So that explains it.

So, a quick read. Not a lot of depth, just a couple of ideas repeated in various forms like motifs in a musical work. And little for me.