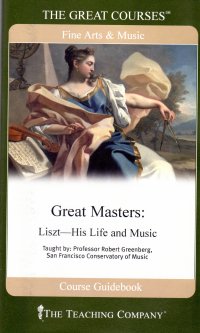 After listening to the course on Brahms earlier in the month, I started on this one immediately as Brahms hated him. So I wanted to see if Liszt hated Brahms. Although it is mentioned, more time is focused on how Liszt helped Wagner’s career along and then came to hate him even as one of his (Liszt’s) daughters married the opera composer.

So, Liszt life does follow the pattern of many of the other composers and important musical figures of his time: A gifted child, nay, a prodigy whose family sacrifices to get him musical lessons and then take him on tour before he’s ready, like Luke leaving Dagobah in The Empire Strikes Back. They make some money, but something happens (Liszt’s father dies while leading Liszt on the tour) which ends that segment of his life. He then takes a few years off, goes on an extended concert tour, supports from afar a Hungarian rebellion (Liszt being a Hungarian born of German stock, he identifies as Hungarian). He settles in Weimar, builds it into a cultural center, and has a turbulent family life with two women whom he cannot marry.

The lectures have a wonderful digression into the evolution of the harpsichord into the piano and then improvements in piano technology that really allowed the music of Beethoven and eventually Liszt.

So my impression of it is that Liszt was a phenomenal pianist and composer of piano pieces–whose works were often called impossible to play until someone saw Liszt himself do it–but he is not as well known for his symphonies. And later, he wrote symphonic poems, musical responses to known stories, that were not well received in his day but are heavily influential even to this day. Which probably means that they played some part in the twentieth century degradation of all arts, but I am not steeped enough in the study of music–despite listening to a couple of these lecture series–to really make a good case for it. I just hold as my default that all art veered from good to laying the ground work for bad in about 1880 or thereabouts.

Still, I like Robert Greenberg as a lecturer and look forward to the other couple of sets I have on the stack in this lecture series series. Although I have changed focus and am listening to something different now–I fear if I listened to them all at once, I would not distinguish them as well as their biographies have a lot of similarities.