Although I said October 22 that this might be the earliest Christmas ever at Nogglestead and although we have been playing the Christmas radio station on the console stereo for a couple of weeks from sun up to bedtime, it was only this weekend that we got our Christmas decorations out. We put up the trees and got the lights on on Saturday and put the household decorations (including 2020’s upcoming Christmas straggler) on Sunday. Which led me to some musings, as things often do.

Earlier in the week, I looked through the Christmas section of Walmart, hoping to find a couple of mistletoe decorations to hang over several doorways at Nogglestead so I could ambush my beautiful wife several times a day. However, I could not find any mistletoe. At all. So I wondered if perhaps, as a Christmas decoration, sensitivity and #MeTooism destroyed centuries of tradition. On Sunday, we went to Target because… I don’t remember, exactly, why. Perhaps because it was across the street from a pet store we needed to visit for a gift card.

So I picked my doorway at Nogglestead, and I tried double-stick tape to hold it up, but that only lasted as long as I was looking at it.

So I got a couple of thumbtacks and a green cable wrapping twist tie, and tacked it atop the door frame. 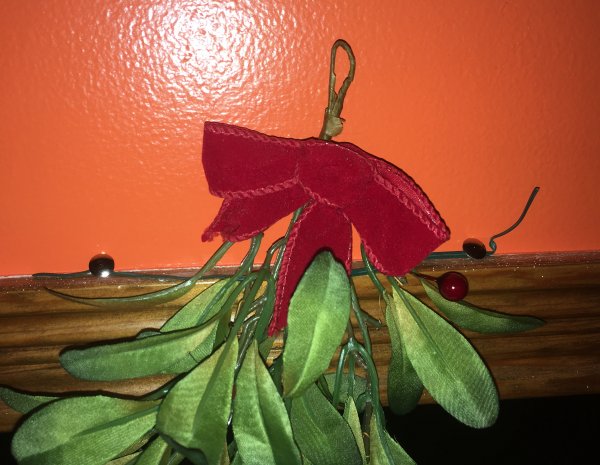 As I should be able to slide the mistletoe out without removing the tacks, I might leave them there year round as they’re not visible from the ground level.

I had similar trouble taping up the stockings on the mantle in our living room, so I stuck four little screw-in hooks on the inside of the mantle. I leave those in year-round and only hang the stockings on them during the month and a half Christmas season. Some day, someone who buys this house after us might discover them and suss out that we had four family members or think we had four kids. Maybe they will come to use them, too. I’d like to think I would leave at least something as a legacy, but it’s also entirely too possible this house will be scrapped for smaller homes to be built on lots of the former Nogglestead whose name will have been forgotten.

But you’re spared a rant about how mistletoe has been completely removed from the market, and Mrs. Noggle has safe routes throughout the house with only one point of attack.

As I was unpacking the Christmas kitchen things–salt and pepper shakers, coffee cream pitcher, and only the lid of the sugar bowl which is either broken and discarded; broken and awaiting a dop of glue on my workbench; or packed in another box and maybe lost in the packing (the Christmas Straggler 2019 winners)–I came up with a salt and pepper shaker that is a shark and a human leg that attaches to the shark’s mouth with magnets. 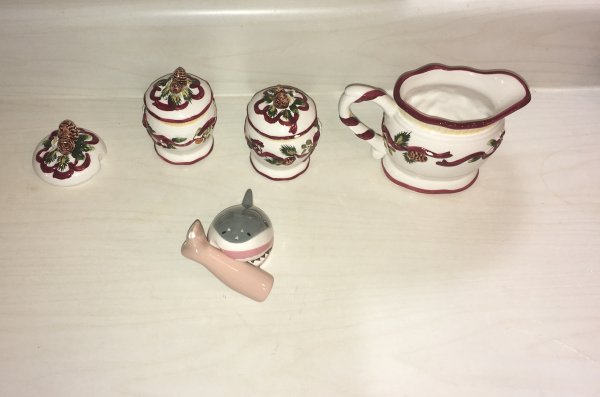 Alright, that is not a Christmas decoration.

Early in their marriage, my parents had a hobby of going to the ruins of old farm houses and finding treasures. My dad collected old bottles nad had quite a collection going for a while. The one thing that remains from their expeditions is a set of sleigh bells that we hung up for Christmas in our apartment in the housing project. Those bells came with us in the divorce, so we hung them on the door of the trailer and later the door of the house down the gravel road in the valley.

They came to me after my mother passed, right after we had children and started to decorate for Christmas in Old Trees–so decorating for Christmas has not always been a staple of our married life. I don’t know if the leather band they were on was the original leather harness or a piece of deer hide my father had from his hunting expeditions, but it was thin, and some of the bells were tearing away, so I bought a belt blank at the local leather shop and mounted them.

The new leather strap is thicker than the previous one, so it’s stiffer; opening and closing the door does not jingle them, but when I walk by, I often reach up and shake them for a festive sound–and I will continue reaching up as I pass even into January, after we’ve put them away for the year.

About the same time, I came up with some bells at a garage sale or something along with an old belt, so I made a set of sleigh bells for my brother and his family to hang on their door. I haven’t been to his house at Christmas time in that intervening near-decade, and I haven’t asked if he hangs them. I would prefer to think he did. 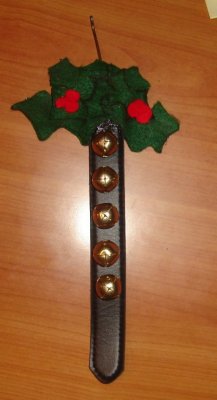 You know, I still have some bells and might be able to come up with a small piece of leather or belt; perhaps I should put together another one of these for my niece-and-nephew-in-laws, for whom I am having trouble thinking up gifts this year (there’s a lot of that going around–with the downer of a year and imagined penury, I am uninspired again this year vis-à-vis gift giving). However, they might already own the one depicted above. 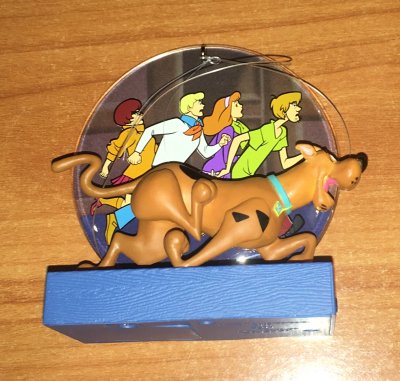 We got this one of the first years that we lived at Nogglestead–my boys just started watching Scooby Doo, Where Are You?, and I found this in a Hallmark shop where I took the then-near-toddlers when we were looking for something else. I mean, I put my now-twelve-year-old in the cart–can you imagine such things? I can only barely.

When you push a button on the side, the ornament plays the theme from Scooby Doo, Where Are You? Only this year it did not. Does Daddy, now Dad, have the requisite three LR44 watch batteries on hand to make it work again? Shut your mouth! So now it plays again.

The Hallmark store is gone, of course, as is the grocery store a couple doors down. Part of the grocery store, where we bought some of the annual gingerbread houses, was replaced by another grocery, briefly, but the government-subsidized Hy-Vee across the street drove them out of business. A thrift store has taken the edge of the grocery store’s space, leaving a partially chopped large retail space for rent. The Hallmark store was eventually replaced by an illegal gambling club which has since been shut down and its signage removed, so that particular large retail space is still for rent. The little expensive pastry shop is still open, but I tend to get doughnuts and not expensive boutique pastries–the only time I stopped in was a couple years ago in February after finishing the Whole 30 diet in January with my beautiful wife.

You know, the Scooby Doo ornament and the Mistletoe might be the only Christmas decorations I have actually purchased (the things for the scratched 2020 Trunk or Treat, annual Lutheran School fundraisers notwithstanding, and mouse that sings “We Wish You A Merry Christmas” notwithstanding). Everything else we inherited or were given to us. Given that some of them are really old, ticky-tack, or old and ticky tack, they’re starting to break down. Perhaps I should break down myself and buy some new Christmas things.

However, the current year is not that year. And we have but a few more years with boys at home. Will we decorate for Christmas after the boys leave? I am not sure. I am not sanguine. But time will tell; people we know at church (or did Before–do they still go to our church? They have not in person at the usual service.) were featured in the local slick for their elaborate annual Christmas decoration, and they’re in their, what, 70s? Perhaps we will carry it on to tide over until we might have grandchildren. Perhaps that won’t be long at all. We could be closer now to having grandchildren than we are to not having children at all.

Eh, perhaps I should spend some time enjoying these Christmas decorations rather than musing on them. But that’s who I am; it’s what I do. It’s baked right into the title of the blog, donchaknow.