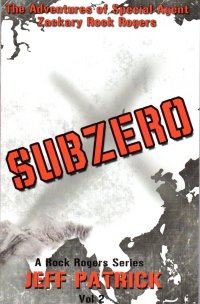 I picked up this book at ABC Books in June at another author’s book signing. As you know, I had read My Name Is Rock, the first book in this young adult series, earlier that month. I thought I might get another one someday, but that turned out to be sooner than I had anticipated.

At any rate, what I could say about the first I can say about the second: It’s a young adult novel with a Christian protagonist who prays before going into the set piece battles. It has the kind of set pieces connected feel you get out of the more obviously outlined-and-filled men’s adventure paperbacks, but with simpler language, even less connective tissue, and a whole lot more explanation points.

In this book, Rock Rodgers has to go pretty immediately from Egypt (his doings there described in My Name Is Rock) to Siberia. The leader of The Agency, the clandestine black ops group Rodgers works for, has been kidnapped by the wife of the US Senator whose son was kidnapped in the earlier book. The wife, before she married the Senator, owned her own mining and shipping company and was a worldwide trafficker in drugs before The Agency started disrupting her operations. So she’s going to try to get the head of The Agency to reveal its operations, and Rock has to figure out where to find the Colonel before he does.

So we get a series of set pieces: Infiltrate deep into Russia, go to such and such place, shoot some people, find a clue, go to another place, do a hard probe / hit the enemy compound while the bad guys play off of each other.

So it is a lot like an Executioner novel, but with a prayer or two thrown in.

When I was writing novels, I kind of had an idea where the things would go and what scenes would arise, but I didn’t work from a hard outline, so I’d like to think my scenes didn’t feel like set pieces. Perhaps I should, though, as people who outline novels seem to have some succes in finishing them.

But back to this series: I am not sure I’ll read the next book. When I bought this book, I bought a copy of My Name Is Rock for my boys. I am not sure they’ve read it yet. When I was their ages, I had transitioned to adult novels. Maybe I should instead get them some early John D. MacDonald work.