On weekends in May, I did a number of virtual duathlons through the local multisport club that I belong to.

I’ve also posted some glib things on social media in an attempt to win some Ozark Multisport Club swag.

I mentioned that the four routes out of Nogglestead are:

Which is true: If you leave Nogglestead to the south, you can cut over to the smaller state highway on a farm road, and it’s only hilly. If you continue south to where the farm road intersects with the state highway, it’s very hilly. And kind of like an M.C. Escher drawing. You go up a hill and around a corner and up another hill and up another hill. To be honest, I’m not sure where you actually go downhill in that route. The third route is north out of Nogglestead; in addition to starting out with a couple of rolling hills, they’re followed by a couple of really large hills with a small valley in between them. The valley is more like a gulch. And if you go west out of Nogglestead, you get the farm road leading to Republic, which is narrow, curvy, high-speed, and hilly.

I have mapped out a number of routes, landmarks, and distances for runs. If I run to the farm road to the south and back, it’s a mile; if I run south to the church and back, it’s a very hilly two miles; if I run to the pipeline pumping station in Battlefield and back, it’s two miles and less hilly; if I run to pizza joint in Battlefields and back and once around the yard, it’s a 5k (3.1 miles); if I run north but turn at the road in the bottom of the gulch and around, it’s an alpine 3.1 miles and a very bad idea; once around the block across the street is 4.2 miles; if I run south to the state highway and take it through Battlefield to the gas station and come back around and down the private lane just south of here and out to my driveway, it’s 6.2 miles (a 10k).

The bike routes are a little dicier. I can use any of these loops to add mileage, but I really don’t have any good routes to the farm roads and state highways out west. The alpine route plus a high-speed, little shoulder state highway or the aforementioned hilly autobahn route. So I’ve ridden into town for my routes. Which includes some torturous hills you don’t notice in a car.

At any rate, I did the last of the OMC duathlons the last weekend in May: 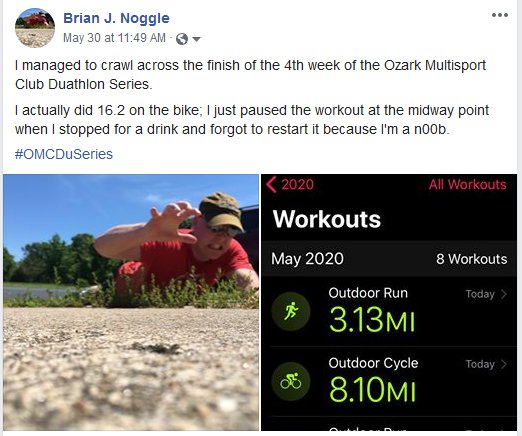 I don’t think I take multisport competitions as seriously as some people do, but apparently, I take them too seriously.

So that last weekend of May, I did a 5k on the hilly route, a ride into town and back, and the alpine 5k route listed above (a run/walk situation instead of a true run).

Both of those efforts were about the length of a sprint triathlon’s bike and run component, and the last was the run equivalent of a 10k. So I felt prepared for this past weekend’s activity: An Olympic-length duathlon.

Some of the people I work with put a new discussion group on the in-house collaboration software about running and biking and multisports. Apparently, a number of my co-workers are into it, too. A couple weeks back, a number of them did a 17 mile virtual duathlon. This time, though, it was a “Double Down” with about double the distance. A 6.2 mile run and a 24.8 mile bike ride. No sweat. I was ready, ainna?

I didn’t sleep well on Friday night, partially concerned about the event. I didn’t eat well before hand, probably. I did hydrate pretty well, which is often a mistake I make, going a little dry because I don’t want to have to urinate during the race, and I cannot drink while running or biking–if I am breathing hard and swallow air while drinking, it’s a bad, bad thing.

My route out was the very hilly route, and it killed my mindset very early. I got right past the church, about a mile into the run, and I was already walking. And I walked a lot of it. Still, I ended up with a run/walk of about 1:15, which isn’t bad. Then I got on the bike, and I did the same route. It was less bad on the bike, but my route took me well into town, and then through a subdivision to add mileage, and then back. To make up the mileage, I went back down and around the very hilly route again to make my mileage. And I had to walk my bike up a hill. 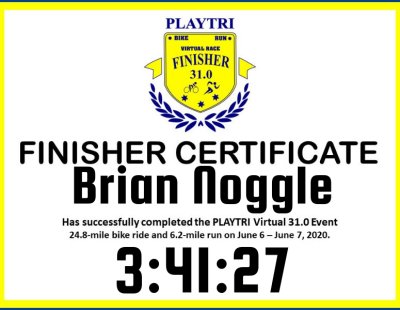 I was one of the first three finishers of the event, and I was in last place for a long time. Watching the results come in on social media, I was an hour or more behind everyone on the bike. Because I went through town, because I’m on a crossover bike instead of a racing/road bike (and this gap will be exposed more with longer distances).

So I did not enjoy the event, and I did not do well. It took almost four hours out of Saturday–but I got an early start, so when I passed the pizza place, I could not stop in to place an order for delivery because it wasn’t even open yet.

Often, a triathlon will knock me out for the day, but this event really killed my energy and mindset for the whole weekend. I didn’t get anything else done but a bunch of reading.

So perhaps I should look back on the weekend and reflect fondly on all the reading I got to do. But reading does not feel like an accomplishment; reading is more akin to recreation and reward.

Ain’t that a pip? I completed an event that a lot of people cannot, but I’m not proud of it. As I’ve said before, I suffer from a mindset that says If I can do it/have done it, it’s easy; if I haven’t done it, it’s impossible.

At any rate with the completion of this event, I might be done with the road running for a while. Except I have a 5k coming up in a couple of weeks, so perhaps I and the boys should run a little before then. And my April triathlon is going to be rescheduled to some point in the near future along with four weeks of the training class ahead of it. And the Tiger Tri is coming up in August, and the boys and I don’t want to miss it.

As Shaman’s Harvest says, “I’m a glutton for punishment; yeah, it makes me feel alive.”

Although they probably didn’t include a semicolon in the actual lyrics.

1 thought on “An Underwhelming Weekend”