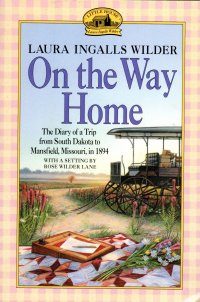 Like The First Four Years, this book was not published in Laura Ingalls Wilder’s lifetime and is based on a loose diary she had of her trip with Almanzo (Manly), Rose, and another family from South Dakota to the land they eventually bought near Mansfield, Missouri, which became Rocky Ridge Farm and their forever home. The diary entries are leavened with Rose Wilder Lane’s recollections and some photographs not only of the family but also of the places they passed through, although many are historical photos of the time when the Wilders passed through and are not of or by the Wilders themselves.

That said, the book does not have a great narrative structure and does not characterize the people in it much. The trip occurs after repeated crop failures and both Laura and Almanzo suffer from bad cases of diptheria. I read Willa Cather’s O, Pioneers! after I started reading the Little House books, and this one reminds me most of the Cather book. Whereas the other Little House books (except, perhaps, the aforementioned The First Four Years) emphasize the technical skills and mindset in being a pioneer, but the diary entries in this book catalog not only how pretty the land is that they visit but also the price of land per acre and the expected yield in bushels per acre.

The other stunning metric from the book is that she reports the daily high temperature on their trip until she loses the thermometer sometime along the way. Many or most of the days of their trip through South Dakota and Nebraska the temperature was 100 degrees in July and August. In 1894. Don’t the models predicting our imminent demise from the boiling seas take data from after that to make their predictions? All I know is that we’ve had two cool springs in a row here in southwest Missouri, this one with a late freeze that killed my peach blossoms (again), so I’m inclined to believe that temperature has varied and continues to vary. But I am no scientist, just someone who takes his lived experience and tries to make sense of it.

I have two other books of Little Houseiana here: A biography of Laura Ingalls Wilder and a collection of her “discovered” writings in pompous hardback that I suspect will be more unpolished bits that she didn’t plan to publish but that the Trust put out on her behalf eventually. I was going to power through them, but I’ve decided to power through the last novel in the Agatha Christie omnibus instead. Because, despite all the cool books I’ve recently found and want to read right now, this is a situation that calls for powering through books I’m not excited about. But soon: fun!