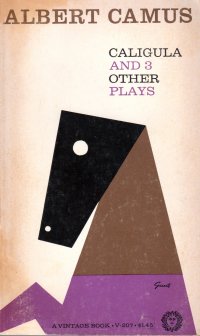 Now that I’ve learned how to read plays, I’m off to the races! Well, no, I’ve always mixed some drama in with the novels and nonfiction I’ve read, so this is not different at all.

At any rate, the book contains about two acts of decent drama amid the talky Existentialist theorizing. I’ve been talking a lot about the paper rhythm and spoken rhythm when discussing poetry, but I could probably also make such a distinction in plays as well. Some plays are snappy, with fast moving dialogue and an entertaining story and has its themes beneath the surface, and some plays are theme-first with lots of paragaph-long speeches about the theme. These plays definitely fall into the latter.

Caligula has its name in the title, but it’s probably the weakest play in the lot. In it, the Roman emperor embraces his freedom and does whatever he wants at the expense of his countrymen until (spoiler alert) he is deposed.

The Misunderstanding is a three act play that contains the aforementioned two acts of stage drama as a mother and daughter run an inn and infrequently kill isolated travellers for their money. They decide to do one last job before leaving their central European town for the sea, and the man who comes in is the prodigal son who has made a fortune overseas and wants to better their lives, but he doesn’t want to reveal who he is until he gets to know them. The first two acts are pretty good tension, but they kill him at the end of the second act only to find his passport in the beginning of the third, and then the man’s fiancée comes in, and they bore her to death. Not really, but the third act is all talky philosophy.

State of Siege kind of looks like it’s going to be The Plague but set in Cadiz, Spain. But it takes a turn when a character representing the plague shows up and institutes some changes to the government to make life more orderly, but one doctor eventually defies the order by not being afraid, which causes the plague to lose his grip on power. The play offers a bunch to think about–is it anti-fascist or anti-Communist in its resistance to a properly ordered totalitarian government? It also has some dramatic tension in it, but it features a chorus and a lot of stage directions that seems like it would make it hard to stage.

The Just Assassins deals with a cell of Russian terrorists who want to assassinate a Grand Duke with bombs. One of their members, a poet, falters when he sees children in the duke’s carriage, so the cell talks and talks about it. The poet is also possibly falling for the bomb maker who might want to leave the revolutionary world behind and be normal. But when the poet gets a second chance, he does not falter, and he is arrested and interrogated by the authorities and forgiven by the newly widowed duchess. But the clemency she grants leads his fellows in the cell to think he turned on them. So it’s an intellectually interesting thing, but it, too, lacks real tension.

Oh, and reading this book answered a question for me. I saw a Camus quote in a Birds and Blooms magazine in 2015 that I wondered if it was a real Camus quote. Sort of. It’s presented in pretty posters and across the Internet as “Autumn–a second spring where every leaf is a flower.”

It appears in The Misunderstanding thus:

MARTHA: What’s the autumn?
JAN: A second spring when every leaf’s a flower.

A little different, but it is from the Camus.

At any rate, worth a read if you fancy yourself a hoity-toity well-read individual, as I so. And I still prefer Camus to Sartre (whose collection No Exit and Three Other Plays I reviewed in 2014–note that both books are from the Cintage Book collection, which were not very vintage in the late 1950s but are surely such now).