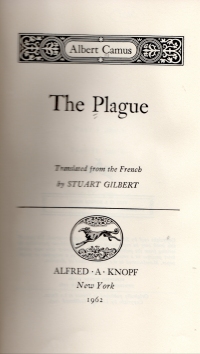 This marks the second time I’ve been through this book; the first was in the autumn of 1994, right after I finished with the university. I remember it distinctly because I carried the book from my job at a computer seller in south St. Louis city to MoKaBe’s coffee house as I awaited a ride from my girlfriend because my Nissan Pulsar was in the shop for an electrical short that would cost it many alternators, batteries, and headlights and me many hours waiting for rides, walking, or awaiting tow trucks.

At any rate, since I have been on a recent Existentialist kick (The Fall, Existentialism and Thomism, and since I’m counting 2012 as ‘recent’ The Stranger–why not? I’m counting multiple attempts at The Myth of Sisyphus in this kick), I picked it up again. Actually, I considered reading it last summer when the Ebola scare hit, but I decided against it.

I don’t know what I thought of this book twenty years ago, but I wasn’t especially impressed with it this time around. Perhaps I just don’t dig French novels or maybe it’s more specific to Existentialist works, but although the book has a dramatic event unfolding over the course of months and the narrator (spoiler alert) is a heroic doctor working to fight the epidemic, there’s not much action involved. Instead, the book describes some events, but most of it is characters (that the narrator observed) talking or thinking about the events and then many of them die. And the plague goes away. The end.

I suppose that conveys a certain French Existentialist description of life, though.