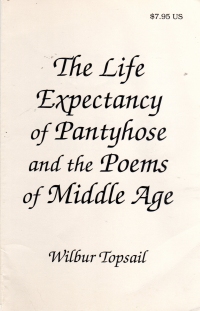 Well, what should I think about this book? Let’s get into what I think might be the back story of this volume: Based on a couple of Internet searches, I think this book was actually published in 1993 under a pseudonym. The “author”‘s name also appears in a review of a book entitled Navigating Infinity:

Author Michael Langthorne and Wilbur Topsail, the main character and narrator in Langthorne’s novel “Navigating Infinity,” have some things in common, but the novelist says it would be wrong to call the book autobiographical.

The second part of the book features poems that Wilbur wrote from his childhood, through college and into adulthood.

“When you read the poems, you will see that sometimes he is venting and he is angry at his parents and then you will see the other side of him wanting to be a sexual person and wanting to have fun,” Langthorne says. “As he gets older and starts to mature, he writes poems that reflect the fact that he is an older person. You see that he has different feelings as he ages.”

That pretty much describes the poems in the book. It’s a lot of Rod McKuen territory, with the aging sex-seeker lamenting less sex and more aging. But instead of the lyricism of Rod McKuen, we’ve got more modern (and therefore lesser) free verse and a couple of prose pieces with some free-form association.

I didn’t like the book very much, thinking it less than some of the more earnest poetry by less serious “poets” like Leah Lathrom or Ronald E. Piggee. Piggee, as a matter of fact, would be contemporary to “Topsail”: both books were published in 1993, and both men would have been about the same age.

But as I got closer to the finish, I thought perhaps I should appreciate the book more if I thought of it less as a book of poetry and more as a collection of performance pieces. Back in the days when this book was fresh, I did poetry open mic nights, and a number of the St. Louis poets like Paul Stewart and Michael O’Brian did great performance pieces that, if you looked at them in their chapbooks, really weren’t much on the page. You could apply this to the Nuyorican Poets, too–I saw them when they were traveling through St. Louis at that time. Once I got that into my head, that maybe these were a product of the time, I tolerated the poems better.

Then I got to one poem, called “Generations”, that was pretty good. So I guess that redeemed the book for me.

It’s odd, a bit of double-effect going on here: The author is a little younger than I am now, but the poems are from my most fecund poetical era (captured, of course, in Coffee House Memories) in the middle 1990s. I can relate to some of the themes of aging now, but I was not very impressed, overall, with the execution. Especially the prose poem things which were a little free-association with little point aside from the free-association and the poetating.

Of course, now that I’m aware of it, perhaps I will pick the novel up if I spot it at a book sale to see what the older (still) author does with the material.