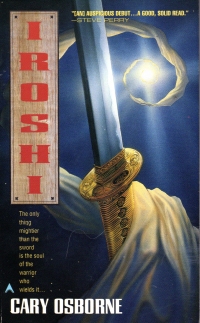 I bought this book a couple weeks ago with the others in the trilogy and got right on it. It’s a short book (216 pages, which is short for modern books, and I do tend to think of this pre-turn-of-the-century book as modern), so it wasn’t daunting as far as reading it (sometimes, I admit, I pick up a book and think, do I really want to spend the next couple of weeks reading this?).

All right, then. The book is about a swordswoman trained in Kendo and some other martial arts. The book starts with her arriving at an out-of-the-way planet and looking for ruins, and then it delves into her past in flashbacks: She’s from a poor family whose father abandoned the them, she went to Earth, the nominal center of a fraying empire, to study with a master. The master was attacked by ninjas as the result of an old mysterious conflict, and when he could teach her no more, he sent her on her way with a sword, and she became a mercenary and a bit of a legend. Now, she finds ruins and finds the spirits of an alien race, and they offer to ‘join’ with her in building a guild to help humanity keep from destroying itself.

Then we fast forward ten years, and the guild is established, and she heads back to Earth to keep the government from moving its seat to the planet with the ruins. There, she discovers the old master’s quarrel was with his own sons whom he disowned because they got involved in organized crime. And they begin their final assaults. Which Iroshi defeats, and part one of the three books ends.

It’s a rather scattershot affair. It’s broken into several parts, with the first being her search for the temple punctuated by flashbacks; then, Part II jumps ten years into the future when she’s been building up this guild of fighters (called the Glaive). There’s sword-fighting, there’s politicking and intrigue, there’s a brief reunion with her father, and then there’s a large ninja assault and some space battles. I don’t think it hangs together all that well.

And it’s the beginning of a trilogy.

I’ll have to jump on the other two books soon so I can sort of remember what’s going on in them and because it’s probably not something I’ll return to after a couple of years with any eager anticipation.