So one of my goals for this year was to read all the comic books I own.

Well, to finish reading the comics I’d purchased, not read all the comics I owned again. Last year, I organized my comic books into short boxes and stored them.

However, I had another short box of comic books that I’d bought in 2008 at a garage sale at Edgar Road Elementary. They were marked 10 cents each, but I bought the whole box for $4 or $5 without counting them. It turns out they came to almost 100. Plus, I’d picked up a couple books at Vintage Stock in recent years. And I’d bought a couple comics for my kids that they’ve then sold to me for a discount when they wanted to buy Pokemon cards. In retrospect, even though they sold the books to me at a discount, I have bought the books twice which makes me a not-so-smart shopper. It also explains why I have single issues of mutant titles–when it seems inexplicable, I realize the cover has Cable on it, and the youngest thought Cable was cool for some reason when he (the youngest, not Cable) was six years old.

At any rate, I decided to read those comics this year so I could enumerate them in the spreadsheet of my collection and then store them properly with the others in an organized fashion. So it’s sort of like how I treat my actual library: I get, then I read, then I enumerate. Of course, there is not much organization in my book library at all, so the comic book collection quite differs from real books.

As you might know, I have been diligently knocking off comic books throughout the year, often as a break from reading actual books or after completing a chapter of a real book like The Grapes of Wrath. The Edgar Road Box, which I would shorten to ERB if I planned on ever speaking of it again, contained pretty good sets of mid-80s comics like Alpha Flight, Power Pack, and The New Mutants, but I was not familiar with those series, so I pushed them off.

But I eventually got to them.

And this week, I finished the last of my comic books. 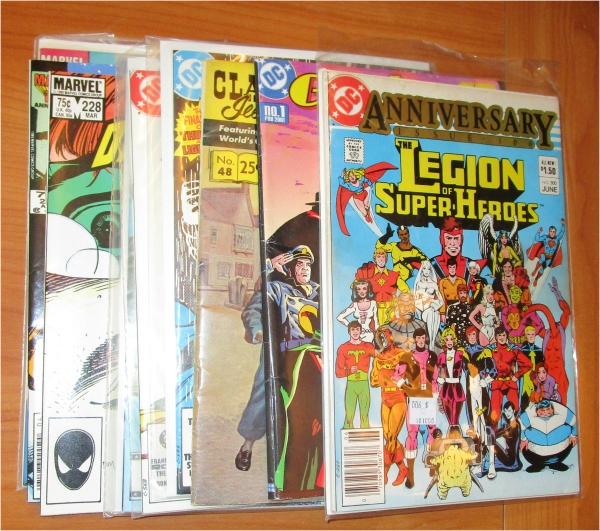 Now that I’m done with the personal goal, I lack a sense of accomplishment.

On the one hand, as you might expect, I look at the end of the stack and I think, “Is this the last time I read a comic book?” I don’t tend to go to the comic book shop looking for comic books these days, and I haven’t even been to Vintage Stock for months. I haven’t been to Missouri Comics since it closed and moved to Florida (I wonder whether the recent hurricane has wiped him out?) The answer to this is probably not, since I’ll still pick up stuff from the independent comic book publishers at -Cons, and if I discover a small box cheap at a garage sale, I might still be tempted. But who knows?

On the other hand, now that I’m done with it, I look at it in terms of a personal goal, and think, “That’s the best you can do for personal goals each year?” To be honest, my annual goals in the past have been tied to certain metrics. Ten years ago, they were: Read 70 books (I read 125); write 50 rough drafts (I wrote 12, most of which ended up on this blog eventually); submit 50 pieces to magazines (I submitted 12; one, though, appeared in a national magazine); write 3 applications (Junk Data; ReadTrack; WriteTrack–0 completed). I also had a nebulous goal (exercise more) and a specific goal (learn to play piano). I didn’t do so good with those goals, although even today I’m tracking the books I read and get close to or more than 70 per year. And I do exercise more, although I don’t track it.

This year, though, I had more discrete goals: To get a black belt; to do a triathlon; to read all the comics I own; to publish a book of poetry. I’m three quarters of the way through the list, and I wonder if perhaps I should not have looked for something more meaningful than these. Or at least more meaningful than reading comic books as an annual goal.

I mean, I’m ::cough, cough:: closing in on fifty years old. Reading comic books in middle age is not something one does. At least, I look around my cohort and don’t see anyone else doing it. I’m not sure I’d even feel comfortable mentioning it to anyone I know. So let’s keep this between you and I, gentle reader.

Of course, when wanting to have a goal of something more meaningful, you have to have a concept of what is really meaningful. Perhaps that is what I’m struggling with when being down on this particular little pastime. I mean, I enjoyed reading the comic books a bit, although I’m more of a book reader these days. I take a certain pride in my collection (I should add an s, as I am proud of most of my collections). Perhaps that’s meaningful enough, and perhaps annual goals can be that trivial.

Who knows? Perhaps I should set as an annual goal for 2018 Get over the mid-life crisis you’ve been having since you were sixteen years old.

At any rate, since I did bother to list them, below the fold you can geek out with the complete list of my comic books as of today.

As I mentioned, I am a Marvel guy.

Given the amount of time I’ve put into amassing this collection and organizing it, perhaps I should take a little pride in it and perhaps find a geekier cohort.