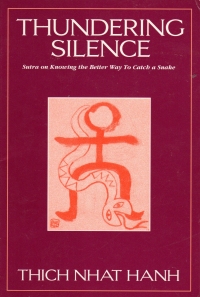 This book is an actual Buddhist book. Unlike Hanh’s own Peace of Mind, Start Here Now by Susan Piver, or Zen Mind, Beginner Mind by Shunryu Suzuki, this book presents a Buddhist Sutra–a teaching of Buddha–and offers exegesis and commentary on it.

The sutra in question is Sutra On Knowing The Better Way To Catch A Snake. In it, a monk/teacher has been telling everyone that Buddha says sensory pleasure does not dissuade you from your practice, and he is brought before Buddha to receive some correction. He does, in a form of some parables, including a better way to catch a snake (spoiler alert: use a stick). Then Hanh steps in with some history about the monk in question and teasing out some meanings about the parables in the sutra. The biggest point, though, is that Buddha wants you to know that his teachings are a tool to use on the way to enlightenment, and somewhere along the way to enlightenment, you should abandon his teachings because they are only a tool. You’ll have to let go of things to get to nirvana.

The book does delve into some of the Numbered Lists of Buddhism, but not deeply; they expect you to know it. It also refers to the cycle of birth and rebirth that is Buddhist religion. Which the aforementioned other books, with their focus on meditation and mindfulness as part of Buddhist practice, do not go into. Which makes it easier to be a Buddhist, I imagine, not having to knowingly embrace the whole meaning of the sutras.

I’m interested in reading more of the sort, if only to sound wise when I whip out something from a Buddhist sutra in conversation sometime.