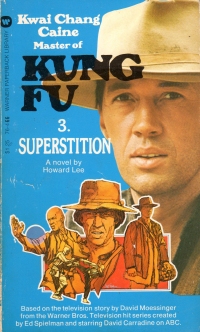 With all the Buddhism I’ve been reading lately, it only makes sense to go back to what might actually be the source of my interest in it of late: reading books based on the television show Kung Fu. Imagine my surprise that my research indicates it’s been two years since I read one. Maybe it’s not the source of my recent (and recent means “within the last year”) reading in the philosophy/religion. Or maybe these things are slow percolating for me.

At any rate, this book is the third in the series. In it, Caine is railroaded in a small town, charged for a crime he did not commit, and is sentenced to labor at a local silver mine. In a related thread, a gunman seeks vengeance for some bad hombres who killed his brother and kidnapped his wife. It turns out that they have bought a mine with the ill-gotten gains, and that the woman went willingly. So as Caine tries to Buddhistically manage himself at the mind under a sadistic overseer and to show the near-beaten other ‘inmates’ how to buck up but not necessarily rebel, the gunman meets up with a couple of women from a travelling show going to the mine to find the fiance of one of the women.

So that’s your setup.

It’s a fun read, quick, laden with Buddhist pop sayings instead of bullets ripping meat. I’m afraid I only have one more of these from whatever book sale I found them, so I’ll run out of them before I run out of Executioner paperbacks. And that makes me a little sad. But, on the other hand, I have another yet to read. Soon, or in two years.