I gave another cousin this bird tray thing: 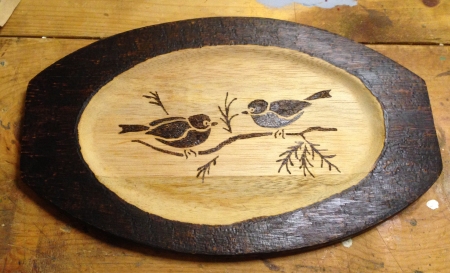 I bought the wood on sale at the thrift shop, so it’s marked .99 but crossed out and has a .49 written in red next to it. I think it was a little tray of some sort, as it had some deep cuts in the surface that I mostly sanded smooth. I liked the dark frame affect on the Make It Happen plaque I made before Thanksgiving, so I colored the rim and put a couple of birds on it from a stencil. I used the narrow tip again on the woodburning iron; I guess this marks growth as an “artist” to do something other than the biggest, fattest crayon available.

I did even out the bottom before I gave it to her and added some hanging apparatus on the back.

I think I might have another of these trays about, or I might have already burned a ship onto it. At any rate, I find it best to scour garage sales and thrift stores for wood to use instead of going to the craft store and buying blanks of some sort. It’s generally less expensive and more unique. It does not, however, lend itself to an assembly line style of production that would make this sort of thing efficient for profitable craft show item. But I get the sense should I do a craft show, it will be all about getting as close to breaking even on materials and cost of the table as possible.