There’s something about autumn that makes me want to sit at my garage workbench and work on handicrafts. I think it’s the fact that, for two weeks, the temperature in the garage is between boiling and freezing. But after finishing the two coffee pots, I decided to take up a woodburning project.

On a recent trip to Hobby Lobby on one pretext or another, I picked up a stencil (it’s supposed to be a fabric painting stencil, I think) with an inspirational phrase “Make It Happen” on it.

So I put it on a block of wood. 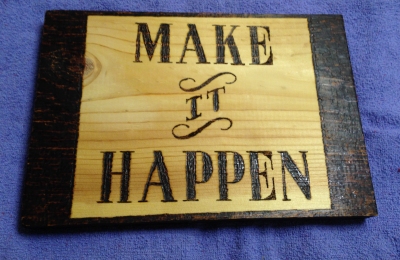 The text uses a serif font, which means I had to use a fine tip for the serifs. I’m not a fan of the fine tips, as I’m not the most surgical hand in the OR. You can see I made a mistake on the K. Also, it looks as though it’s a little crooked and slightly off-center.

I don’t know why I’ve taken to woodburning as much as I have. I don’t work freehand; instead I get a stencil or trace something to then use my rudimentary woodburning tool on. So the work I do is pretty primitive, but it’s enjoyable and leaves one with an artifact. It’s like an adult coloring book where you use fire instead of a crayon.

Now that I’ve cleared it off of my work bench, I have room to do something else.