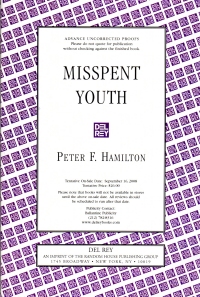 This book is a British science fiction novel from B.O. (Before Obama). The copy I have is an Advanced Uncorrected Proofs version that I picked up some time ago at a book sale along with other ARC and proof copies of books. Which explains some of the typos I found, although fewer than one might find in John Donnelly’s Gold or the similarly self-published Lightning Fall.

At any rate, the plot of it: About 40 years in the future, the elderly inventer of the storage mechanism that allows the Internet of the future is chosen by the European Union for a revolutionary therapy that rejuvenates a human to the age of about 25. The treatment takes about a year and a half, and at the end of it he has to accustom himself to his new youth and to reconnect with his eighteen-year-old son, the product of a marriage of convenience to a much younger woman who is now older than the formerly elderly engineer. The newly youthful fellow does all of this by nailing all the young women he comes into contact with: the granddaughter of a close friend; the trophy wife with whom he’d never actually had relations; girls in his son’s circle; and finally, the son’s infatuation and something of a girlfriend.

All this boffin goes on against a backdrop of English seperatists who want the UK to break away from the EU and are becoming increasingly violent in their insistence. The pseudoclimax of the book takes place at a major right in England where the father and son end up on different sides: The father is inside a heavily guarded conference center to present a paper, and the son is carried along to the riot by peer pressure. They reconcile, and then the father dies from an unforeseen and untreatable side effect of the treatment. The End.

Well, it’s certainly got a 1970s science fiction vibe from it along with some of that later Heinlein “Ew, put it away already!” I saw on Wikipedia that there are a couple other books set in this same universe, but I don’t expect I’ll revisit it.

What did it get right? Well, people access the voice-enabled computer by saying a word ahead of it. I guess they were doing it on Star Trek, but it’s much more relevant now that every second commercial on television is people talking to the cloud. What did it get wrong? Brexit by violence 40 years from now (hopefully).

I suppose the title means it’s a commentary on misspending your second chances by wasting the time as much you did when you were younger anyway. Or maybe that’s being to charitable, but it’s certainly a theme that has resonance and is probably defendible. Maybe we’ll see in 40 years.