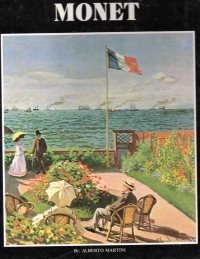 This book is an Avenal coffee table book of Monet’s work which shows his evolution from his early days to his creation of Impressionism and beyond.

As I’ve mentioned before, I like Impressionism because it not so much conveys the immediacy of a scene in a vital way (which they tell me it’s supposed to) but because it reminds me of a memory of a scene–that is, a little fuzzy around the edges.

Which is why I prefer Renoir or Manet to Monet. His work deals a lot with landscapes, and I prefer my memories with people in them. His later work gets to using larger brush strokes which make the items in the paintings less distinct, and I’m not sure how the bigger brushstrokes are better designed to capture the immediacy of light playing on water or whatnot unless you’re losing your sight.

At any rate, this was a relatively quick browse, and it reinforces what I know about Impressionists and my appraisal of them.