So a couple of years ago, we got a bedroom set with a configurable four poster/canopy/sleigh bed and dressers that actually match. As you might guess, this was not my idea.

And then I thought: Magnets.

I bought some craft magnets. I folded the tops of some of the sheers I’d bought but whose pockets were too small for the rails over those rails and used the magnets to stick them. And, voilà! We had the adult equivalent of a fort to sleep in every night.

Until Roark discovered he could leap into the sheer and bat at it until it fell. 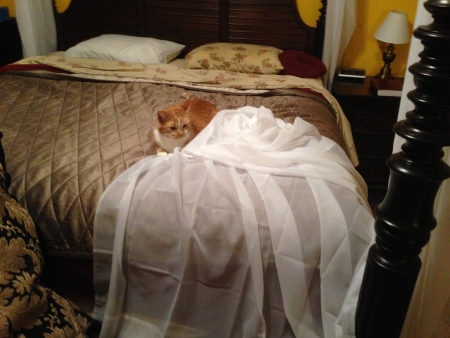 I’m really glad we didn’t go with the expensive custom-sewn solution before he discovered this.