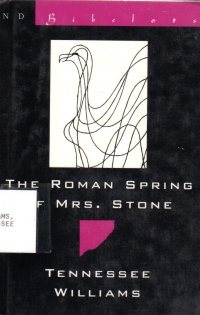 This book is the third I read on vacation. As you might remember, it is one of three books I bought at the Friends of the Springfield-Greene County Library this spring amid oh so many albums.

It’s a short book–111 pages. It’s not a play, it’s a short novel, with dense, vivid prose that draws some attention to itself as it waxes and muses. The plot deals with an aging, retired actress who got by on her beauty rather than her acting ability, which means that she gave it up when she realized she was aging out of beauty. Her wealthy husband dies on a European trip, and Mrs. Stone finds herself in Rome, where a penniless contessa matches aging wealth American widows with young Italian men not so much for marriage as for expensive gifts. When Mrs. Stone realizes what is going on and that she is growing fond of one such young man, she invites death before the loss of her dignity.

So, basically, if you imagine a bit of a mash-up of Mrs. Dalloway–a bedraggled figure is following Mrs. Stone as the young war veteran’s story is interweaved with that of Mrs. Dalloway. However, in this book, the bedraggled figure is death in the form of a serial killer preying on wealthy American widows is following Mrs. Stone awaiting her invitation to strike–and The Awakening set in the period of Three Coins in the Fountain. Which explains why I saw all the scenery described in Deluxe color.

At any rate, the prose, as I mentioned, is deep and rich, but ultimately the book was unsatisfying because of the stylized nature of the suicide and the fact that a fifty-year-old woman was considered washed up enough to kill herself to preserve her dignity. It’s not very flattering to fifty-year-old women of the era.

Strangely, this was made into a film twice: In 1961 and in 2003. Neither of which are going onto my Amazon wish list.